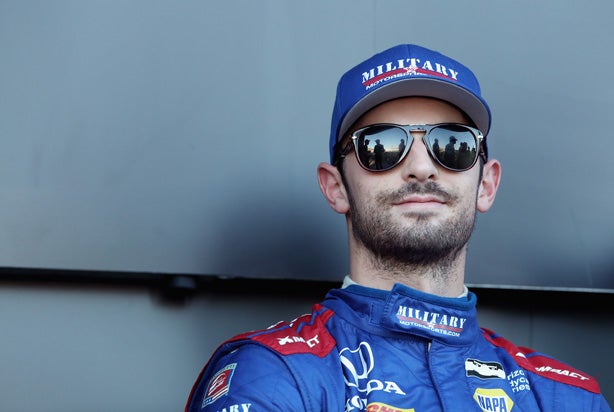 IndyCar driver Alexander Rossi can be seen racing in the 44th Toyota Grand Prix of Long Beach on Sunday on NBC Sports, but non-racing fans are more used to seeing him competing on CBS’ “Amazing Race.”

While the competitive juices will be flowing hard at Race No. 3 of the 2018 Verizon IndyCar Series, Rossi admitted that he did want to kill his partner, Conor Daly, in that other “Race” a few times, “but I think he wanted to kill me too!” he joked.

The 26-year-old Andretti Autosport driver — who won the the Indianapolis 500 as a rookie in 2016 — took a break from track practice to chat with TheWrap about his chances in the historic 85-lap road race and how he battled boredom while locked in a hotel room for days on end traveling the globe, but being cut off from the world.

“I had a lacrosse ball and I took a Sharpie to it … drew a face. I felt like Tom Hanks with Wilson,” said Rossi, referring to Hanks’ 2000 film “Cast Away,” in which his only companion on a deserted island was a volleyball he named Wilson. “The only entertainment I had was bouncing a ball off the wall or ceiling,” added Rossi

See the full Q&A below:

TheWrap: How are you feeling heading into the Grand Prix of Long Beach this weekend?
Alexander Rossi: I am cautiously optimistic. We were really good here last year and had a shot to win when we had a mechanical issue, so I think the team is very motivated to rebound from that. I think we have a pretty good chance at winning if we do our jobs right.

What makes LBGP so special?
The actual race track isn’t that different to any of the other street courses that we do, but in terms of the layout, I think it has a really good rhythm to it and the whole fan experience is cool, like being able to walk from the hotel to the track.

What do you do in the days running up to the race?
Honestly, not a whole lot! I went for a run this morning and had some media stuff … you get to this point where you do things on autopilot. A very important part of driving a race car is staying hydrated because as soon as the hydration levels drop, you get tired and the first thing to go is your vision. I’ve found the most efficient way to stay hydrated is actually deprive yourself of water for very short periods of time by drinking vials of pure salt water at the beginning of the week and then taper off before the race.

The heat is definitely something you prepare for but it is kind of our job, right? It is a race driver’s life as you get to 150 degrees in about 30 laps.

How did your race car driving skills help you compete on the “Amazing Race”?
I don’t know if any of the challenges or skills were similar, but I think what Conor and I had going for us on “Amazing Race” was that he and I had traveled extensively before. We were very used to waking up in different hotels or beds and spending time in airports, just dealing with international travel. That part of our career path helped, but in terms in being a race car driver, I don’t think that was an advantage at all!

What was the most challenging part of the competition?
The lack of communication. Part of the show is that they don’t want anyone to have an advantage — that can be something as minor as being able to get an internet connection, so they completely restrict contact with the outside world for five weeks. That’s the biggest thing, not being able to check in with your family, friends, girlfriend. Then, obviously, being with your partner and only your partner for 75 days is also not the most fun thing.

You’ve said before that the worst thing was the boredom shut up in your hotel room, how did you battle that?
I had a lacrosse a ball and I actually took a Sharpie to it, named it Purple Pete and drew a face. I felt like Tom Hanks with Wilson. The only entertainment I had was bouncing a ball off the wall or ceiling, trying to do tricks with it. Obviously when you’re filming, you’re running around and are part of the show, your competitive nature takes over and all the bad stuff goes out the window. Sometimes it would only be eight hours [in the room], then the longest was 76 hours. It depended on how far the show had to move for the next leg, and the security problems getting 100 people there.

Did you ever feel like you were literally going crazy?
I got to the point where I was considering myself to be borderline insane! I would lock myself in the bathroom for a couple of hours at a time just to have space alone.

Did you get out and see the world at least?
It’s weird because you’re in countries that are pretty cool, but you can’t go out to them — even to the hotel lobby — and you can’t talk to the other contestants unless there are cameras on you so you don’t form a relationship with any of these people. But you do get used to it and because it was the first time doing something like that and not having had any prior experiences, there are probably worse [reality shows]. If I were to do it again, I would know what to expect.

Would you do it again?
I don’t think I would do another show — if I was to do one, it would probably be the “Amazing Race” again because I feel I was pretty good at it. But it was a very unique scheduling scenario for it to be able to work out. As race car drivers, to be able to take that time off and not tell your team where you’re going — we were pretty lucky.

There were a lot of professional athletes on your season — including champion competitive eater Joey Chestnut — did that make it tougher?
They said it was the most competitive season yet. I think whether you are a professional eater or a violist, an NBA player or a race car driver, we were all at the top of our field. So these people knew how to work and maximize their potential on the show.

Back to the Grand Prix of Long Beach, who are your biggest competitors on Sunday?
You always have to be wary of the Penske boys and Scott Dixon. My [Andretti Autosport] teammate, Ryan Hunter-Reay, he’s really strong around Long Beach. He’s won here before, and he’s due for a win as he’s been on a dry spell. I know how motivated he is and will really be going for it this weekend.