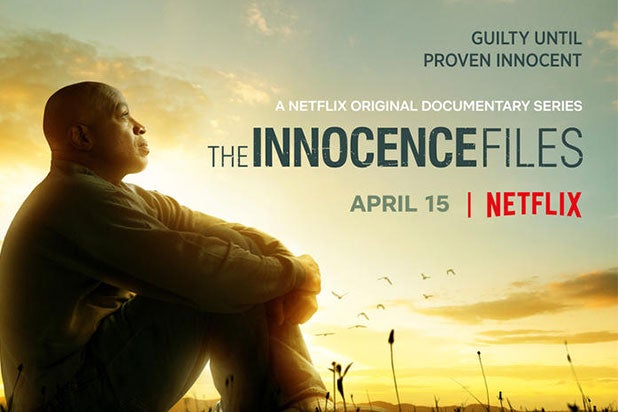 Netflix’s “The Innocence Files” chronicles eight stories of wrongful convictions, and directors and executive producers Alex Gibney, Liz Garbus and Roger Ross Williams said they faced their fair share of challenges getting access to people necessary to tell the stories.

“Access was often a problem, particularly the police,” Gibney told TheWrap. “But the big issue for me, at least on the film that I directed, was the fact that I didn’t know I was going to turn out.”

Gibney directed the episodes about Chester Hollman III, who was wrongfully convicted of robbing and murdering a man in Philadelphia in 1991. Gibney started production on his episodes in December 2018, but Hollman was only exonerated of the crime in 2019. Gibney had no idea of what the outcome of Hollman’s case would be when they first started filming.

“That was a challenge because it’s hard to make a film on a deadline when you don’t know if there’s going to be an ending before you’re finished,” Gibney continued. “Luckily for us, and far luckier for Chester, he was exonerated.”

Williams agreed that access was an issue for his episodes, as well. Williams focused on junk science, mainly about how the evidence used his cases were bite marks, which is now considered an unreliable method.

Levon Brooks served 16 years in prison for a 1990 rape and murder of a 3-year-old girl in Mississippi — a crime he didn’t commit. A forensic dentist named Dr. Michael West determined that bite marks on the victim’s body were from human bites and after the victim’s sister identified him, two teeth matched the marks on the victims’ body. He had a plausible alibi. Four months after Brooks was convicted, a similar case happened where Kennedy Brewer’s bite marks were identified on the new victim’s body. However, DNA testing in 2001 said the semen did not match Brewer either, but another round of testing matched the profile of Justin Albert Johnson. Brooks and Brewer were freed in 2008. In the series, forensic analysts say crawfish could’ve caused the marks that West was convinced were human bite marks.

“West has put more people away to the junk science of bite marks than probably any other dentist,” Williams explained. And the key belief in each and every one of his testimonies stands — even after they were exonerated, he still stands behind his testimony. He was a great character to follow around and to tell the story.”

Doctor West’s testimony has contributed to six wrongful convictions, but still, as of 2019, bite mark evidence is still admissible in all 50 states.

“For me, the challenge was that in a place like Mississippi, Dr. West wasn’t necessarily going to connect with me or talk to me,” Williams explained, adding that he was a black man. “I sent in a white producer and crew, and it took us a long time to convince him to tell us his side of the story… You know, when we filmed in that bar that has Confederate flags everywhere, it wasn’t a welcoming place for someone like me. I felt terrified.”

He added: “There was one point, we were filming the Confederate statue that was like a statue with one side that looked like the Ku Klux Klan. There was a guy holding a flag at the end of his gun. And if you looked at it from one angle, it looked like a hooded cloud…. And these pick-up trucks started circling us, and this guy pulls up and he gets out of his pickup truck and he’s walking to me, filming with the phone. I was absolutely terrified. And he actually said, you know, that’s a Klan statue… It wasn’t always the comfortable situation, and it was a challenge to get that side of the story — there is a certain mindset that they weren’t going to welcome someone like me, a black gay man.”

Liz Garbus, whose documentary credits include “What Happened, Miss Simone?” and “Killing in the Name,” focused on the theme of eyewitness misidentification in her episodes, where people were wrongfully convicted due to false identification.

“For me, it was about peeling back the layers of ways in which the suggestion from an officer or one small suggestion, or a couple of words, can set the most well-intentioned witness or victim off in the wrong direction and have them make a decision or point to a picture that has ramifications for decades of people’s lives,” Garbus explained.

One of Garbus’ episodes focuses on Franky Carrillo, who was convicted of the 1991 shooting murder of Donald Sarpy (you can read his guest blog here). His conviction relied solely on eyewitness testimony from six people, with two later admitting they did not actually see who the shooter was but that they were heavily influenced by police. Two men have since confessed to the crime, and Carrillo was released in 2011 — 20 years after serving time.

“To really dive into the psychology into what happened is fascinating,” she added. “At the end of the day, what all these lies tell us is that there is the desire above all else for a conviction. The desire to have someone in prison for the crime. Unfortunately, once that person is convicted and goes to jail, they lose the presumption of innocence.”

Williams agreed: “It’s also really about a criminal justice system that is focused on conviction and closing a case above some other. There’s a terrifying certainty to the process because there just seems to be a desperate need, particularly on the part of the prosecution, to take a world of gray and turn it into a world of black and white, or thumps up or thumbs down. Guilty, not guilty.”

The eight cases explored in the series are cases that the nonprofit organization The Innocence Project and other organizations within the Innocence Network have worked to overturn. It’s a nine-episode series that is comprised of three parts — The Evidence, The Witness and the Prosecution. Episodes in the series were also directed by Jed Rothstein, Andy Grieve and Sarah Dowland.

“With this kind of thematic focus, it gave great attention to the individual stories themselves, but also highlighted systemic problems in ways that one single documentary never would have done,” Gibney concluded.