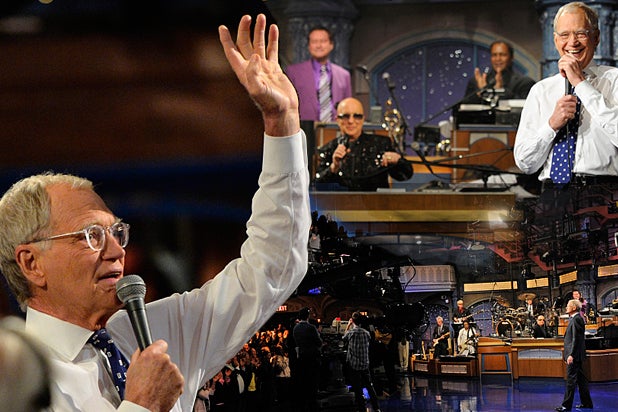 David Letterman etched a new chapter in television history on Wednesday night as he said goodbye during a star-studded final episode of CBS’s “Late Show.”

There were no tears from the legendary comedian, but the sign-off was emotional, especially for his staffers and fans lucky enough to score tickets to the Ed Sullivan Theater for the finale.

The show was broadcast at 11:35 p.m. Eastern, with CBS releasing a clip of the opening a few hours earlier, which can be seen below.

1. As Paul Shaffer cued the band, Letterman walked out to thunderous applause and a standing ovation from the studio audience. Wearing a navy blue suit, white shirt and polka dot tie, the sharply dressed host appeared genuinely touched by the warm reception.

2. Letterman peppered his final monologue with wisecracks about recently resurfaced Cuban immigrant Elian Gonzalez, Scientology and other hot topics. “I hope to become the new face of Scientology,” he joked about his retirement plans. Then he launched into a bit about Gonzalez: “Do you remember Elian Gonzalez? The kid is 21-years-old and yesterday he announced that he wants to come back to America. Now my question to you is: Should I take this personally?”

3. The finale also included a star-studded Top 10 list of the “final things I would like to say to David Letterman.” Among the famous faces showing Dave their appreciation — Jerry Seinfeld, Chris Rock, Steve Martin, Barbara Walters, Julia Louis-Dreyfus, Tina Fey, Alec Baldwin, Jim Carrey, Peyton Manning and Bill Murray. Baldwin joked, “Of all the talk shows, yours is the most geographically convenient to my home.” While Martin added the insult, “Your extensive plastic surgery was a necessity … and a mistake.” And Rock injected a bit of racial humor into the Top 10 list with “I’m just glad your show is being given to another white guy.”

4.  Former presidents George W. Bush, his father George H.W. Bush, Bill Clinton and current President Barack Obama appeared in a pre-taped sketch, in which each joked: “Our long national nightmare is over.”

5. The Foo Fighters, one of Letterman’s favorite bands, closed out the show with a performance of “Everlong.” Just before the taping, the band tweeted a photo from the theater along with the caption: “Final time on this stage…#ThanksDave.”