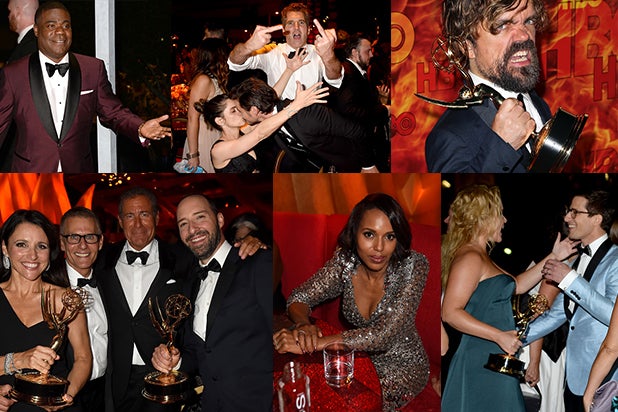 After “Game of Thrones” won a record 12 statuettes, while “Veep” and “Olive Kitteridge” also scored big, the premium cable network celebrated at a pop up metropolis on the corner of Melrose and San Vicente at the Pacific Design Center, where a few squadrons from the West Hollywood Sheriffs Department and three walls of security protected the guests.

The red hues looked ripped from a “True Blood” set designer’s palette, had a rotating center feature, and lodged near the more-packed-than-normal center were HBO captains Michael Lombardo and Richard Plepler, hosting a varied crew of their own winners and non-native talent orbiting the multi-platform factory that at this point, with HBO GO and HBO Now, has technically fulfilled its mantra that it “is not TV”.

On TV’s biggest night though, the creative community flocked to the party .

More telling of the social gravity, it was the names from beyond HBO who made this their party preference: Kerry Washington anchoring a central booth, Michelle Obama co-star Billy Eichner towering over his conversations, Whitney Cummings getting pulled in multiple directions, Kiernan Shipka causing a flash storm on the boulevard-width carpet, and Frances Bean Cobain (“Montage of Heck”) cushioned from the crowd by a train pals, some in flannel shirts. How appropriate.

A few steps away from Cobain, Viacom Music and Entertainment boss Doug Herzog slid by reality guru Mike Darnell, minutes before TV Academy CEO Bruce Rosenblum would head towards Michael Lombardo’s tables. (The tables had multi-color sequin table cloths, with the same color changing properties that made the Coachella “butterfly” a hands-on winner back in April.)

Bill O’Reilly and Lorne Michaels: The steam was organic to HBO’s tent, not a camera fault. These two make an odd couple, but good conversation:  (Mikey Glazer)

The social cocktail at HBO led to delicious pairings like Bill O’Reilly (much taller in person) and Lorne Michaels, having a chat about their respective upcoming fall seasons – hot topics on a hot night that actually caused my camera to steam when asking them to pose for a picture.

All had come from the Governors Ball, where a half acre of Fiji waters (with make-up friendly straws) waited for the thirsty pouring out of the Microsoft and who had hiked 150 yards down Chick Hearn Court.

Tracy Morgan was the huge surprise of the night. Meanwhile, we may be looking at this year’s Emmys host greeting next year’s Emmys host, as Samberg and Schumer connected at the Governors Ball. (Getty Images)

Inside, Gary Newman (as the head of the host network Fox) had the choice “100 tables”, immediately to the right of the entry way. He held court at the point, with the perfect vantage point to see all comers. Two section counter clockwise from Fox across the floor, Bob and Linda Gersh were settling in to their seats adjacent to the new more spacious lounge areas.

“We are so thrilled for all our winners,” Bob Gersh told me. “Jeffrey Tambor, Allison Janney, Margo Martindale, (“Olive Kittredge” winner) Richard Jenkins,” he continued. (Jenkins was the guy who said “That was Lady Gaga!” during his acceptance speech.)

Tambor’s “Transparent” showrunner Jill Soloway, who won early in the night, was cracking an old-fashion full sugar red aluminum can of Coke across the hall in Cheryl Cecchettos’s “Reigning with Radiance” themed playground. The space had crystal chains dropping down from the ceiling, framing circular lounge areas for privacy and intimacy within the converted convention center space.

David Foster and Andrea Bocelli entertaining at the Governors Ball, the first time in recent history that there has been headliner level talent at the big bash. (Lester Cohen/WireImage)

“Outstanding Supporting Actress Comedy” winner and name-checked Gersh victor Allison Janney found her own privacy in plain sight. She leveraged boyfriend Philip Joncas to both carry her Emmy and lead the way, allowing her to draft off him as they cut through the room.

The short hike from the Microsoft Theater to the Governors Ball was rewarded with long tables of refreshments: water, wine, and hundreds of champagne glasses ready to be grabbed. (Mikey Glazer)

In a return to Emmy night celebrations after hosting a Creative Arts Emmys party in 2014, Comedy Central took over Boulevard3 on Sunset in Hollywood for an indoor-outdoor soiree tagged “Going for the Gold in a Town Full of Plastic”.

In a rare solo appearance, “Another Period” creator/star Natasha Leggero came without her popular “+1” Mayor Cutie, her dog.

True to the guitar-rock musical genre that played Jon Stewart out on his final “Daily Show” last month, the DJ inside spun the Rolling Stones “Sympathy for the Devil” as guests noshed Mexican street corn and garlic toast, acceptable indulgences when it is so late that there are no more cheeks left to air-kiss.

When Ed Asner woke up on Emmy Sunday, he had no idea he would be the punchline to so many of Andy Samberg’s jokes. At right, “Thrones” royal Gwendoline Christie with actual queen, Latifah. (Filmmagic)

How sweet it is: “Thrones” author and creator George R. R. Martin at HBO. (Jeff Kravitz/FilmMagic)

TheWrap reveals its highs and lows from TV’s biggest night at L.A.’s Microsoft Theater on Sunday

Donning a scruffy beard, tattered robe and questionable personal hygiene, host Samberg opened the show paying tribute to the way many of us are watching TV these days. Missed 151 episodes of "Castle"? Back in the bunker you go!