The NFL’s biggest game of the year has long graduated from being Super Bowl Sunday to Super Bowl Week.

While ESPN won’t be airing the matchup between the New England Patriots and the Atlanta Falcons (that honor goes to Fox this year), they do dominate coverage running up to the 3:30 p.m. kick-off Feb. 5, and post-game analysis the days after it.

And there’s a lot more to it than debating whether Tom Brady’s Patriots or Matt Ryan’s Falcons will win at Houston’s NRG Stadium, TheWrap has learned.

“We think we’ve written the playbook on how to cover the Super Bowl by now,” senior coordinating producer Seth Markman said on a call to TheWrap from ESPN’s downtown Houston home for the week. “Everything is going perfectly so far. The location has been wonderful, the weather is beautiful, and I don’t think we’ve ever had a Super Bowl when both teams are so co-operative with us.” Which is saying something if you’re familiar with Patriots’ coach Bill Belichick’s prickly reputation with the media …

“I think there is going to be a lot of intrigue about both of those guys,” Markman told TheWrap. “We’ve always been fascinated by Rex for years. Whether you like him or not, he definitely resonates in the football world — he’s brash, outspoken … just what TV executives like me look for.”

For those not familiar with Ryan’s recent resume, he coached both of the Patriots AFC East rivals, the New York Jets and the Bills, before being fired by Buffalo at the end of the 2016 season. 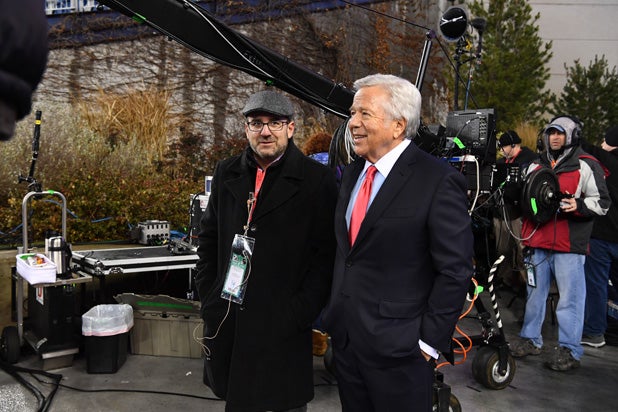 “He is a defensive genius, he really does bring a unique perspective for us as someone who has gone up against the Patriots, Brady and Belichick so many times, with varying degrees of success,” Markman continued. “Yet he’s very open about the mistakes he’s made over the years. He is gonna be Rex, he’ll have some funny lines, but I think he will offer a very unique viewpoint.”

As for Beckham, “Odell is one of the best players in the league,” the ESPN producer said, “and has been a lightening rod with the stuff on the field and the boat trip in Miami, etc. Whatever you think about him, you can’t argue with the talent he has as a player.

“This is as good as I’ve felt about a show going into it on a talent perspective on all levels,” Markman added.

Super Bowl LI takes comes a week after a wave of protests across the country over Trump’s executive order on immigration (with some ESPN talent heading to Houston among those stuck in airport delays Sunday) and while the network won’t ignore any breaking news — politics won’t be a focus of ESPN’s coverage, Markman explained.

“I don’t think politics will inject into the Super Bowl, our team has talked about if there were protests by the set — we will cover it as a news story because it is news and we all wear journalists’ hats first,” he said. “We’re not going to ever bury our heads in the sand. That said, we try to stay away from political viewpoints and issues unless it has an effect on preparation or on game day.

“We stick to sports as best we can for our core audience and fans,” Markman explained. “Most of them want to hear about what our analysts think about the Super Bowl, and not the political climate in the world.

“It is meant [football] to be an escape, our role is to provide escape for people who don’t want to be beaten down with politics every day. There are plenty of networks covering it non-stop and doing a great job, so we’re better off offering an alternative,” he explained.

The real debate in Houston, of course, surrounds what will happen on the field — and as Brady drives for a fifth ring and New England tries to take home their record-breaking ninth championship title, “the Patriots are definitely one of the top draws,” Markman said. “There is lots of intrigue, there is a lot of people who love the Patriots and a lot of people who want to see them lose.

Meanwhile, “Atlanta is new to the party, they’ve only been to the Super Bowl one other time [in a 1999 loss to the Denver Broncos], but people know their offense. Matt Ryan is a rising star and probably gonna win MVP for the season. Julio Jones is a great receiver and one of the league’s best running backs.”

And then you have the star players on the ESPN set, many of whom like Steve Young or Tedy Bruschi have Super Bowl rings of their own.

“For us, the diversity of talent is really important — the positions they’ve played, their ages, background of the experts,” the producer said.

“There is no one who has the experience and credentials that this group has,” he added.

ESPN’s Super Bowl commentator team is led by veteran NFL host Chris Berman, who is covering his 35th Super Bowl. In recognition of his many career milestones and achievements, ESPN will present an hour-long tribute  — “Chris Berman: He Did Go All The Way — on Thursday, Feb. 2, at 10:30 p.m. ET before Berman assumes a new role at ESPN following Super Bowl LI.

Berman will be hosting ESPN’s three-hour “Countdown” show on Super Bowl Sunday from the company’s main set in downtown Houston. He will be joined by Wendi Nix and analysts Matt Hasselbeck, Trent Dilfer, Randy Moss and Charles Woodson. In addition, “NFL Insider” Adam Schefter will be at the stadium and Sal Paolantonio (pictured above with Brady and Ryan, covering the Patriots) and Ed Werder (Falcons) will provide the latest updates on the teams on game day.