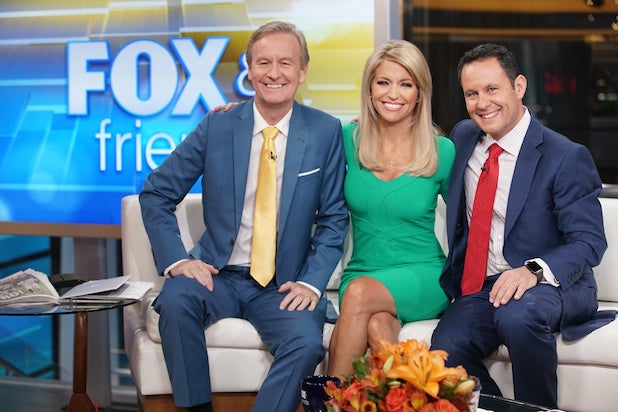 Moises Payret woke up at 3:30 a.m. to make the drive into Manhattan on Friday from his New Jersey home. Payret, who works in real estate, had been selected to be part of a live studio audience for Fox News’ morning show “Fox & Friends” — and he wasn’t going to be late.

“I watch [‘Fox & Friends’] whenever I can,” he told TheWrap from his seat during a commercial break for the show, noting that he is also a proud subscriber of the 6-month-old Fox Nation streaming service.

Payret joined about 50 people that day at Fox News’ imposing headquarters in midtown Manhattan as an audience member during a live broadcast of the show. While it may not seem like much, it’s one of the few shows on Fox News today that has been experimenting with live audiences and the new format reflects one of the biggest changes to “Fox & Friends” since the show began in 1998.

“I’m here because I love Fox News,” Brenda Tuttle, another audience member, told TheWrap. “I love the interaction with the co-hosts and the guests and I am here with a friend who also loves to watch, so we are enjoying this together.”

Friday’s taping of “Fox & Friends” was just the fourth time the network has brought members of the show’s loyal fan base into the channel’s inner sanctum — an in-the-studio expansion of the show’s “Breakfast With Friends” segments, which often take show co-hosts to small-town diners across the country.

Over stacks of pancakes, plates of bacon or fake eggs, hosts gamely ask locals what they think of the day’s news. It doesn’t always go quite as planned — as when a diner in Riverside, Missouri, openly urged viewers to support higher taxes to fight climate change — but it’s been successful enough that “Fox & Friends” executive producer Gavin Hadden thought it worth trying the idea closer to home.

“Our ‘Breakfast With Friends’ diner series inspired us to begin to host live studio audiences. In traveling to different towns across the U.S. and talking to viewers, we realized the magnitude of excitement for ‘Fox & Friends’ across America and we wanted to bring that energy to our New York studio,” Hadden told TheWrap. “We started it about three months ago and it’s proving to be a great way for our co-hosts to engage with and connect with our loyal audience.”

Not every Fox News superfan gets an invite into the midtown Manhattan studio. First you must apply online via the “Fox & Friends” website and provide their name, email, state, phone number, as well as a “message” to explain why you’re interested in coming on set. “Terms and conditions apply and will be explained if we contact you,” the website says.

Of more than 1,000 applicants, a lucky few are then contacted. Phone interviews follow. “They wanted to ask me my name, where I am from, basic information about my background,” Payret said, recalling the exchange. Fox News declined to provide specifics on both its screening questions and the show’s “terms and conditions.”

Once viewers are given the green light, they are met at Fox News with stringent security measures.

“We went through a metal detector, kind of like a TSA check thing. There was a lot of security,” Sergio Velazquez, another “Fox & Friends” audience member, recalled. The entrance to the “Fox & Friends” set is on the ground floor, just to the left of the building’s main entrance. The doors leading to the studio were guarded by three security guards.

“You always use your training,” one guard, a former NYPD officer, told TheWrap during a commercial break. “I have never had to get physical. There are many tools you could use, like presence and voice. It’s never gotten physical.”

Tight security serves as a reminder to any would-be protesters who may have slipped in that Fox News will brook no disturbance during its marquee morning show. While “Fox & Friends” has long led cable news ratings for the 6-9 a.m. timeslot, routinely trouncing rivals at CNN and MSNBC, its influence in recent years has grown exponentially thanks to President Trump, who is known to be a careful viewer of the program.

POTUS frequently tweets out headlines and news items from the show, which can set news cycles churning for days. Hosts such as Brian Kilmeade have been known to look directly into the camera and address Trump personally to drive important points home.

On set on Friday, the show proceeded as usual, although hosts occasionally dipped into the crowd for real-time responses to issues and segments. News about a Taco Bell-sponsored hotel in Palm Springs, California, drew a smattering of applause, before a sober interview with author Sean Parnell about the dangers Iran poses on the world stage. Sen. Tim Scott (R-SC) took selfies with audience members during the break, while co-host Steve Doocy raced out during a commercial for a slice of pizza — which he gamely placed under some papers before going back on air.

Fox Business hosts Charles Payne and Stuart Varney stopped by as well to offer their full-throated support of the president’s economic policies. A nameless show employee motioned guests to applaud each time “Fox & Friends” came back from commercials.

When the show wrapped, hosts chatted briefly with audience members, who were then sent home with Fox News merchandise, and pizza was brought in for all. Pete Hegseth grabbed a slice for fellow co-host Ainsley Earhardt, but she declined.