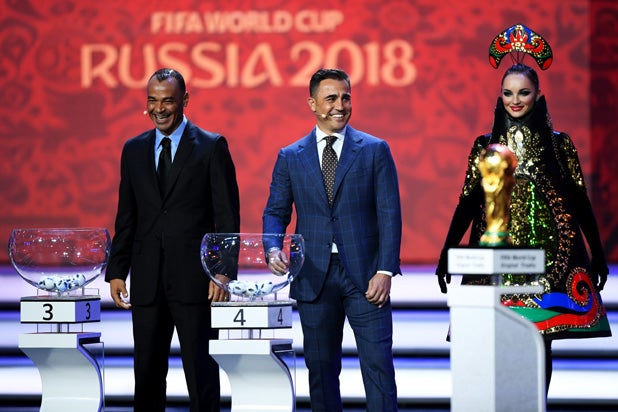 The eyes of much of the world Friday were on the FIFA World Cup draw held in Moscow, Russia, but those watching Fox Sports’ live broadcast of on the West coast were a little bleary-eyed: the show kicked off at 6:30 a.m. local time.

And with the United States missing out on its first World Cup in more than 30 years, the mood going in was a little different this year. Stars and Stripes fans weren’t gathered at bars across the country waiting to see who they’d take on in the world’s biggest sporting event. Many of them probably wanted to forget the draw was even happening.

Russian President Vladimir Putin presided over the ceremony, which began with a couple bizarre dance numbers that were followed by a group of tuxedo-clad soccer luminaries including Argentina’s Diego Maradona and Brazil’s Cafu picking slips of paper contained in tiny balls from glass jars to determine which teams play in which groups. And in the Fox studio in Los Angeles, former U.S. national team stars Landon Donovan and Alexi Lalas, former Mexican national teamer Mariano Trujillo and hosts Rob Stone and Kate Abdo tried to figure out what it all meant — and immediately started predicting the tournament.

The U.S.’s absence has to be disappointing for Fox, which will be broadcasting the World Cup for the first time (and plans to put as many matches on the big Fox broadcast channel as possible), but the draw brought the network a few lucky breaks.

One of those came early, as Spain and Portugal — the last two European World Cup champions — were drawn as the top two teams in Group B and will face off in the final game of the tournament’s first Friday.

Mexico, which has a massive fan base in the U.S., landed in the “Group of Death,” along with defending champions Germany, Sweden and South Korea, which caused Trujillo to grimace when the country’s name was plucked from the jar. Even if Mexico manages to advance, El Tri is likely staring down a matchup with Brazil.

Also Read: USA Eliminated From Men's World Cup for First Time Since 1986 and Fans Are Crushed

Hosts Russia found themselves in the opposite situation, ending up in a group with Uruguay and relative minnows Saudi Arabia and Egypt.

“Is this the worst World Cup group ever?” Donovan wondered aloud to those on the set when Saudi Arabia was announced as the fourth team in the group. He doubled down on that sentiment on air, sarcastically wondering how Russia could have managed such an easy draw.

Immediately after the matchups were announced and before the broadcast cut away from Moscow and back to Los Angeles, a team of researchers descended on the stage with copious notes about the teams, their prior meetings and any other pertinent information. For example, while the rivalry between Spain and Portugal needs little explanation, the crew pointed out that fellow Group B member Morocco also has history with Spain. There was also plenty of talk about Group D, which includes Argentina, Croatia, Nigeria and Euro 2016 darlings, Iceland.

Also Read: How Telemundo Is Trying to Score With One of TV's Growing Audiences: Bilingual Soccer Fans

And while the hosts had plenty of information to digest, they had to quickly pivot to projecting the tournament’s knockout round in order to get their individual brackets ready to be shown during the next segment. Nobody picked Germany to repeat and Lalas went with a surprise choice, Belgium, which raised some of eyebrows on stage despite the country’s No. 5 FIFA ranking.

Lalas was proud of his choice, taking a selfie in front of his bracket projected on a wall-sized monitor during the next commercial break and enduring some light ribbing from TheWrap about his bold prediction.