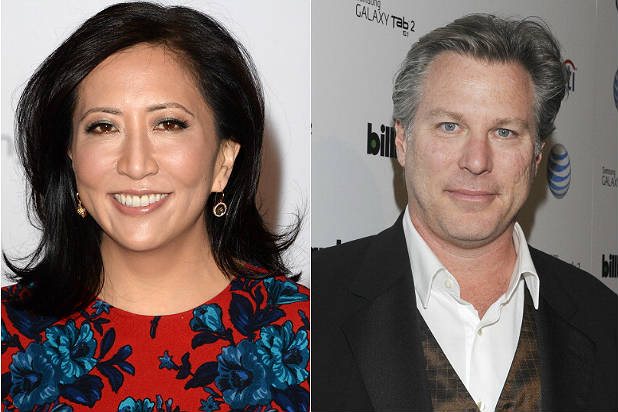 It was just a year ago that Ross Levinsohn, the former Yahoo chief, accompanied The Hollywood Reporter’s Janice Min to the Golden Globe awards, a digital misfit among the Hollywood glitterati, just ahead of his appointment as CEO of Guggenheim Digital Media.

Now Min has been promoted to co-president and chief creative officer of a newly created entertainment group at Guggenheim, while Levinsohn finds himself sidelined, outmaneuvered by his former report.

The move by Guggenheim Partners President Todd Boehly follows a savvy minuet by Min to get her contract renewed, her salary more than doubled and to rid herself of a pesky boss who didn’t get print, according to an insider with knowledge of her deal.

But the business strategy behind Boehly’s move remains perplexing to many. It is common knowledge in media that the rebooted Hollywood Reporter has yet to break even, much less turn a profit.

TheWrap has learned that The Hollywood Reporter lost $6 million in 2013, not a small sum of money for a publication that was making $15 million when Guggenheim acquired it five years ago. (I’m now remembering reporting a similar loss two years ago, see story above.) A spokesman for Guggenheim told TheWrap: ” THR is not responsible for losses.”

Paid subscriptions remain stagnant at about 12,000 per year – the same as it’s been for about three years – and circulation tops out at about 70,000 in the best case. This gives some perspective to Min’s favored claim that THR is the new Vanity Fair, which has some 800,000 subscribers.

Web traffic has grown to a significant 5.7 million unique visitors per month according to ComScore in December, but is not the main revenue driver at the publication.

For all this, Min was given another $1 million-plus on her $1 million contract according to TheWrap’s insider and control over Billboard, a brand that has been listing badly and makes money mainly because of licensing revenue and the Billboard awards show. Guggenheim said it would not comment on executive compensation.

Meanwhile John Amato, former CEO at Backstage (which Guggenheim sold) , is in charge of business operations, coming on as co-president of the entertainment group. Adweek is now being run as a separate unit within the media group. That leaves THR and Billboard on their own.

Boehly can certainly do the math over THR. So why the tolerance for the ongoing losses? Boehly likes the glossy publication that Min has built to stroke Hollywood executive egos, but there’s more. TheWrap has learned that the longer-term play is to roll THR and Billboard into an ESPN-like entertainment media channel, that would leverage the brands of both.

Guggenheim’s spokesman confirmed as much to TheWrap saying: “That is one of Guggenheim’s many plans.”

Min is known to hanker after a position running a cable network, and recent reports said she used job interest from the A&E network to force Boehly’s hand on Levinsohn.

Is there a business imperative that would make a paid entertainment cable channel make sense? Personally, I don’t see it. Entertainment news is ubiquitous, both on television and online. And entertainment doesn’t have the draw of live sporting events that forces fans to pay $17.99 a month to their cable provider for must-have ESPN programming of tournaments and games.

Still, what passes for entertainment news on TV is ripe for disruption, that’s for sure. Entertainment Tonight and Access Hollywood are tired formats and relics of a pre-internet era. Something is bound to displace them.

As for a Min-run Billboard, those who love the trade’s business coverage can probably look forward to stories in the vein of “Inside Justin Bieber‘s Tour Bus,” and “How Britney Got In Shape for that Vegas Show,” or “Get The Latest on Beyonce’s Hair and Makeup.” Also: Mo Austin’s Malibu hideaway.

Min makes little secret of knowing little about the music business, in fact she doesn’t make little secret of not knowing the movie business either. At a welcome speech she made to Billboard in New York, a staffer asked what her favorite albums were at the moment, and she said (a paraphrase):

“I have yet to see any of this year’s Oscar-nominated movies and that doesn’t stop me from running THR… I think I have an ability to know the story and what people want to read about.”