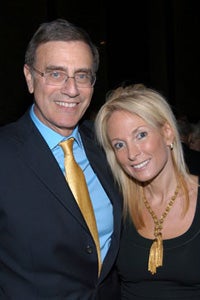 There are quite a few things to note from Thursday’s estimated $70 million sale of the Hollywood Reporter, Billboard, Adweek and a slew of other Nielsen Business Media titles.

(Not to mention the startling closure of Editor & Publisher and Kirkus Reviews, two venerable titles with a combined 184 years of publishing history.)

The Hollywood Reporter & co. are now the property of a consortium led by Jimmy Finkelstein [pictured, with Pamela Gross Finkelstein]. It’s unclear what he plans to do with the titles, but one thing is clear: the deal signaled a not-so-subtle exit from the print media business for Nielsen.

According to Ad Age, revenue at Nielsen Business Media – including print, online and events — was down nearly 30 percent to $82 million during the third quarter of 2009.

And cutbacks at the Hollywood Reporter have led to a skeleton staff – and reports that Nielsen had been mulling shutting down the print version altogether (which, in the end, might not be a terrible thing for the understandably weary employees sitting in 770 Broadway and 5055 Wilshire – if it means keeping their jobs).

The yearlong search for a buyer for its struggling b-to-b titles is evidence of their struggles. Plenty of would-be buyers came in to kick the tires and check under the hood, only to walk away.

The deal was notable for who wasn’t involved: That Lachlan Murdoch, who had been seeking to join Team Finkelstein, pulled out at the 11th hour, is more of a direct condemnation of print than it might appear. This is a guy who’s been trying to break away from his father’s formidable News Corp. shadow and start a media empire of his own, yet he decided his recent $110 million investment in an Australian radio company has less risk than print, and is more deserving of his attention. "It’s weird to say, but radio isn’t as risky as magazines," one M&A source said.

Lachlan may eventually make a print buy, but for now he appears to be gun-shy.

Nielsen’s decision to close E&P rather than offload it to at least one reported suitor – Alan Meckler – was shocking too. "I’m shocked that a way was not found for the magazine to continue some form," said Greg Mitchell, editor since 2002, "and remain hopeful that this may still occur." Alan Meckler, CEO WebMediaBrands and owner of Mediabistro, said on Thursday that he had offered to "take the publication off Nielsen’s hands" several months ago and "pay nothing," but that the company spurned his offer, "claiming it could receive ‘millions’ for the title." (Meckler said he would’ve likely shuttered the print version.)

Nielsen may not be done with its slashing-and-burning, either. In a memo to staffers, Nielsen Business Media president Greg Farrar offered this not-so-subtle hint: “We’ll continue to assess the strategic fit of our remaining portfolio of publications.”