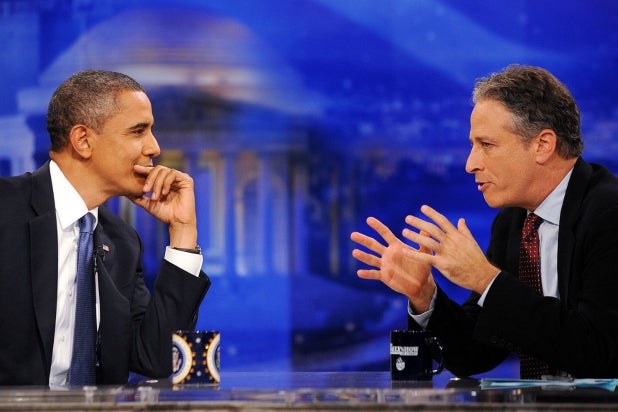 Jon Stewart enjoyed access to President Obama that many journalists would fight tooth and nail to obtain.

“The Daily Show” host met privately with the President at the White House on a number of occasions, including during the 2011 budget debate and the 2014 Ukraine crisis, according to a new report by Politico.

“I can’t say that because Jon Stewart was unhappy policy changed,” former Obama campaign adviser David Axelrod said. “But I can say that he had forceful arguments, they were arguments that we knew would be heard and deserved to be answered.”

“I’d be hard pressed to think of a person who spoke with the same amount of authority to that big of a group of people,” Eric Lesser, a former Obama White House aide, said. However, when Lesser was reminded that he had worked for the President, he added, “People in media.”

The story goes on to detail Stewart’s influence within the political world, with Sen. John McCain (R-Arizona) referring to Stewart as “modern day Will Rogers and Mark Twain.”

Some claim that it was the influence of Stewart and his show that helped end major political holdups, such as a bill that would provide health benefits to those who had become ill during the clean up after 9/11 at Ground Zero.

“What took us eight years of walking the halls of Congress, Jon Stewart in 22 minutes literally moved mountains and gave us a heartbeat again when we were flat lined,” Army veteran and 9/11 clean up worker John Feal said.

Also read: How Stephen Colbert Is Staying Relevant in the Run-Up to 'The Late Show'

Jon Stewart’s final episode of “The Daily Show” will air on August 6. President Obama made his final appearance on Stewart’s Comedy Central program earlier this month, and joked about “issuing a new executive order that Jon Stewart cannot leave the show.”

Watch a more serious portion of the interview below.