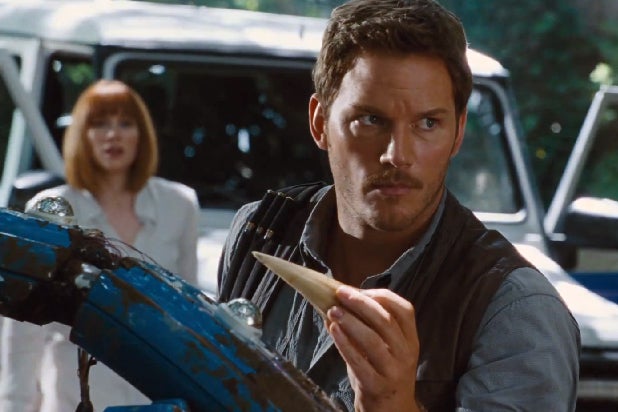 “Jurassic World” shattered domestic, foreign and global records for a three-day opening weekend, and they did by finding a sweet spot that Hollywood studios pursue like the Holy Grail.

The 3D dinosaur adventure drew young moviegoers with larger-than life action and older fans of Steven Spielberg‘s groundbreaking 1993 sci-fi classic, many of whom brought their kids and enabled “Jurassic World” to play like a family film. Thirty-nine percent of the PG-13-rated “Jurassic World” audience was under the age of 25 and 61 percent was over.

A major reason Hollywood produces remakes and sequels to so many 1980-90 movies and TV shows is the potential score with both groups. It happens occasionally, as Warner Bros. did with “Mad Max: Fury Road” this summer and “Godzilla” last summer, but no one has ever done it as well as Universal did with “Jurassic World.”

It wasn’t an accident that “Jurassic World” devoured the box office like a hungry Indominus Rex. Universal’s marketers, guided by president Josh Goldstine and co-president Michael Moses, set out to wring every bit of juice from “Jurassic Park.” And they succeeded, taking in a mind-boggling $524 million globally in just one weekend, including a $208 million North American debut.

“The original ‘Jurassic Park’ was the second coming of ‘Jaws’ and was for many the film that defined the summer movie experience,” Rentrak senior analyst Paul Dergarabedian told TheWrap.

“It was the first film to open to more than $50 million, and was seen and loved by a massive audience that was at once repelled and thrilled by its science-run-amok premise, its homage to the dinosaurs that had thrilled them since grade school, the technological breakthroughs and the quintessential popcorn movie theater experience that the iconic superstar director Steven Spielberg delivered,” he said.

He delivered on “Jurassic World,” too.

Also Read: Behind 'Jurassic World's' $150 Million Gamble on a Director With Just One Indie Film Credit

Spielberg had a major hand in the selection of inexperienced director Colin Trevorrow, who had only the quirky indie film “Safety Not Guaranteed” under his belt. And the veteran director-producer was all in on the promotional campaign, doing interviews and blessing the seeming endless stream of magazine, online and TV shows recalling his original film.

Trevorrow and stars Christ Pratt and Bryce Dallas Howard spoke repeatedly about being inspired by the first film, and the studio’s corporate synergy amplified their message.

NBC and corporate siblings USA and the SciFi Channel aired “Jurassic Park” in specials hosted by Pratt and Spielberg, and piggybacked a “Jurassic World” preview onto them. They targeted Hispanic audiences with “Jueves Jurasico” — Jurassic Thursday — on Univision and Telemundo.

The marketing team did a first-rate job of timing the campaign, launching the first trailer during NBC’s NFL game last Thanksgiving, then attaching it to the blockbuster “The Hobbit: Battle of the Five Armies” in December.

They continued the mainstream media rollout with an extended spot that aired just before kickoff at the Super Bowl, the most-watched event in TV history, and attached the trailer to the year’s biggest hits, the studio’s own “Furious 7” and Disney’s “Avengers: Age of Ultron.”

At the same time, Pratt and a raptor were highlighted in Entertainment Weekly’s 2015 movie double issue, then he made the mag’s cover for the Summer “Must List” issue and landed on the cover of GQ.

The carefully calibrated campaign culminated with a glitzy premiere featuring Jimmy Buffett at the Hollywood and Highland complex, turning the entrance into a facsimile of the film’s Jurassic World.

The timing of the premiere three days before the film’s opening proved ideal, with anticipation peaking to drive $18.5 million in late-night screenings on Thursday. That set off a storm of positive word of mouth that led to an $87 million opening day Friday, the third-best in history.

“Universal has proven over the past few years that their dynamic marketing, outside the box release dates and having their finger precisely on the pulse of what moviegoers want has paid off handsomely,” said Dergarabedian.