“Dive bar” is a term of endearment in America. They are establishments built around simplicity and comfort, and we forgive their occasional smells and weathered interiors and neon glow.

No one is important in a dive bar, which means all are equal. Except, of course, when Lady Gaga wants to execute a seemingly grassroots marketing campaign to promote a new album, one that hinges on invading these sweet and low places to mount ambitious concerts in venues that barely hold a jukebox.

Invade she did, on Thursday night, a blackbox club in L.A.’s Silver Lake neighborhood — the final stop on a three-city #DiveBarTour sponsored by Bud Light, following shows in Nashville and New York City.

The project she’s promoting is “Joanne,” a stripped-down album of ballads and breakup anthems that seems a galaxy away from the tone of her 2013 record “Artpop.”

That was a conceptually abstract effort that left mainstream audiences confused and weary. “Joanne” is the opposite — imagine a microphone and a stool, a guitar leaning against the wall, a  suede hat dipped over the singer’s eyes. It was executive produced by the frustratingly ageless Mark Ronson.

Thursday’s show was a byzantine display of production and security, coordinated police protection and news trucks sending live feeds. Wristbands and lanyards and security waivers and social media restrictions. It had the look of an open mic night with the planning of a presidential inauguration.

Those guests, along with journalists and select fans, added up to 280 souls drinking cold cans of beer and taking orders from an agitated roadie.

“Do not touch The Lady,” one barked. “The Lady might touch you, but that’s her choice.”

The show was streamed on Facebook Live, as the two previous had been, and started almost 90 minutes late. The crowd sporadically broke into chants of “Jo-anne! Jo-anne!” — and Gaga’s diehard fans could be heard faintly, chanting the same battle cry, outside on Silver Lake Blvd. 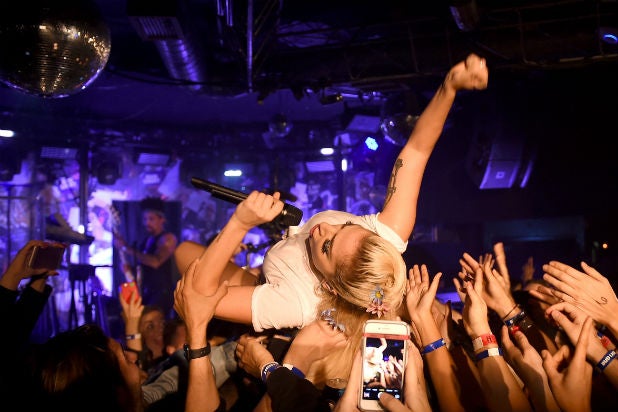 When Gaga finally entered flush with energy and flanked by two dancers, it reminded me of a compliment once paid to her by British television host Graham Norton. It was at peak Gaga fever in 2011, and Norton had just seen her perform at the massive O2 Arena in London.

“You made the O2 feel like a pub gig,” Norton told her.

The opposite was true in Los Angeles last night — for 30 minutes, she made a divey music den feel like the Staples Center.

Costume changes, choreography, hairography, horns and drums and the whole mess, for 280 people screaming, singing and many crying beneath a single disco ball.

Ronson joined Gaga on bass and acoustic guitar for several numbers. When she sang solo he sat just offstage, leaning against equipment and watching her with a sentimental focus.

Gaga addressed the crowd about the importance of the election, about the loss of her Aunt Joanne (for whom the album is named), she even shouted out to fans in Saudi Arabia who contributed to making her single “Million Reasons” a global No. 1 on iTunes.

The set flared up hot and ended quickly after six songs  — but not before Gaga doused herself in an entire can of Bud Light and crowd-surfed briefly. She left through the front door, waving goodbye to hundreds outside.

The natural-fiber-wearing residents of the upscale neighborhood, which orbits around elitist coffee den La Mill, could barely contain their excitement while walking rescue dogs and rubber-necking.

It’s unclear if “Joanne” will ever see a worldwide tour befitting a star the size of Gaga. At the top of the year, she’ll headline the Super Bowl halftime show and then head to work on Bradley Cooper’s directorial debut “A Star Is Born.”

Considering these three shows were streamed for the masses on Facebook, this mini-tour may well suffice. Forget arenas — her intention, her artistry, and the scope of her ambition is big enough.