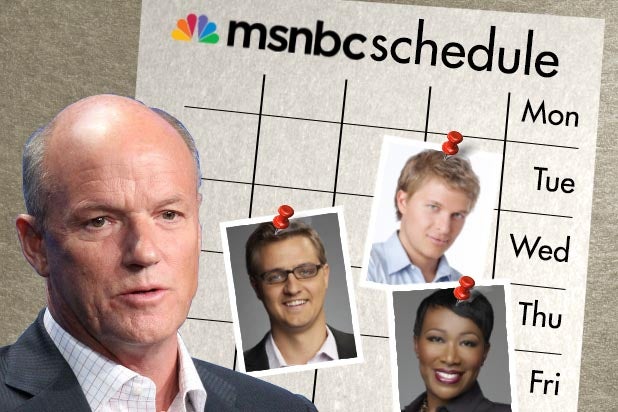 When President Obama was reelected in 2012, MSNBC was “leaning forward” and smiling wide as Obama 2.0 propelled it to record ratings and a firm grasp on the No. 2 spot in cable news.

Also Read: Inside MSNBC's Evolution: How Phil Griffin Is Tinkering With Network

Network President Phil Griffin knows MSNBC needs to turn those numbers around quickly, and multiple insiders tell TheWrap Griffin is in the process of deciding what potential changes to make, including tinkering with primetime.

One well-placed insider told TheWrap that the ratings-challenged “All In” with Chris Hayes — airing in the cable news sweet spot of 8 p.m. ET — might get uprooted for a different timeslot. It’s not clear who will replace Hayes in the event that he gets yanked from 8 p.m., but since Keith Olbermann’s abrupt 2011 exit, MSNBC has filled the all-important timeslot with internal talent rather than seeking hosts from the outside.

Hayes, whose show will hit the two-year mark in April, has never been able to hold or grow the audience his predecessor, Ed Schultz, had. The wonkish host offers a blend of opinion and deeply-reported stories on “All In,” choosing to pass on serving as the traditional bomb thrower in primetime. That approach worked on the weekends, where Hayes debuted for MSNBC in 2011, drawing strong ratings as host of the breakfast roundtable “Up.”

But his weekend success hasn’t crossed over to weekdays. In January, he finished third behind Fox News’ “The O’Reilly Factor” and CNN’s “Anderson Cooper 360” in both total viewers and the demo. Among MSNBC shows, he finished third, trailing Rachel Maddow and Chris Matthews. But Hayes’ struggles haven’t only impacted the 8 p.m. time slot–Maddow’s 9 p.m. program has also slumped due to its weaker lead-in. In January, “The Rachel Maddow Show” was down 50 percent in the demo year over year.

Hayes’ relocation from 8 p.m. would mark the fourth change in that time slot in as many years dating back to Olbermann’s abrupt departure from the network.

Other talent on the hot seat air hours earlier.

“Ronan [Farrow] and Joy [Reid] — something will change there,” another insider told TheWrap, adding that many within MSNBC believe one of the two — Farrow at 1 p.m. Reid at 2 p.m. — will see their shows canceled soon.  The duo, who debuted on Feb. 24, 2014, have been major contributors to MSNBC’s daytime woes.

MSNBC’s other programming problem appears to be Griffin himself, whom multiple insiders told TheWrap is too attached to the hosts he’s handpicked and the shows they’ve developed, including Farrow, Reid, Hayes and Alex Wagner, who hosts “Now” at 4 p.m. ET.

Wagner’s show has struggled since moving from the noon slot to replace Martin Bashir a year ago. “Now” routinely attracts demo numbers south of 100,000 viewers; on the day of the State of the Union address, it attracted just 26,000 demo viewers.

But it’s doubtful her show will be affected, one insider says, because Wagner is one of Griffin’s “favorites.”

“It’s stubbornness,” another insider told TheWrap about Griffin’s reluctance to axe struggling shows hosted by his chosen talent. “There are certain shows and talent that are very much his. They were his ideas, so I think that’s where you see the least flexibility.”

And much of the talent that’s under-delivering was brought in by Griffin — first as regular guests, later made hosts. The MSNBC chief moved Hayes from a guest and fill-in anchor role to weekend host to primetime host in less than two years (Sep. 2011 to Apr. 2013); he moved Wagner from a guest to noon ET host to 4 p.m. ET host in little over two years (Nov. 2011 to Jan. 2014).

Another insider told TheWrap Griffin has withheld moving or canceling Hayes’ show — despite anemic ratings since it launched — because he’s married to the idea of younger, wonky hosts in primetime over the traditionally older, bombastic anchors who’ve occupied Fox News and MSNBC, like Bill O’Reilly, Sean Hannity, Keith Olbermann, and Ed Schultz.

Whichever type of host you’re partial to, it’s the latter that have proved the ratings breadwinner, as cable primetime viewers tend to want someone to cheer for and with at night, rather than watch a more nuanced, informational program.

Despite the ratings woes, one bright spot for MSNBC has been its digital division, which launched the online network “Shift” over a month ago. As TheWrap reported, the channel, which offers original programming from fresh faces like the New York Times’ Josh Barro, NBC News Correspondent Luke Russert and foreign correspondent Ayman Mohyeldin, has produced results for MSNBC.com. State of the Union coverage on the web saw a 130 percent increase year over year in unique visitors.

But TV is the mothership, and the stakes are high for MSNBC, with the ratings gold of the upcoming presidential campaign — with no incumbent running — due to spark wall-to-wall coverage across cable news. Griffin will want to allow whatever programming changes he makes a grace period to take effect before the campaigns, debates and elections take place. In other words, expect to see those changes soon.

MSNBC declined to comment to TheWrap for this story.