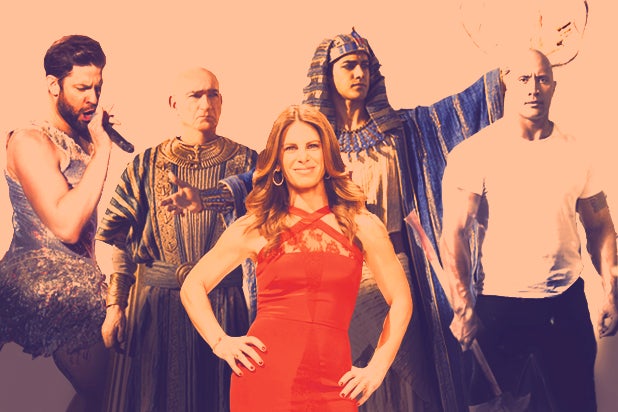 Spike TV, the natural habitat of millennial men thanks to shows like “Catch a Contractor” and “Tattoo Nightmares,” is stepping out of the man cave — or at very least inviting women and older viewers inside.

On the heels of the runaway success of “Lip Sync Battle,” the Viacom-owned network is rolling out an ambitious slate of scripted shows, beginning with Sunday’s premiere of the Ben Kingsley ancient-Egypt epic “Tut.” It’s also expanding into live events like Dwayne “The Rock” Johnson’s upcoming overseas military special “Rock The Troops.”

Spike currently skews 43 percent female in the 18-49 viewer demographic, the closest they’ve come to gender balance in primetime and total-day viewing since 2008, according to Nielsen’s current data.

The network, which historically catered to young males particularly when it was called TNN, is also skewing older: The current median age for viewers is 41, an uptick from 39 in 2014 and a staggering increase from 2000, when the average was 29.

“We felt like we were on the way to broadening out the channel,” Spike president Kevin Kay told TheWrap, pointing to programs like the tattoo-artist competition “Ink Master” and renovation show “Bar Rescue” as serving a diverse and maturing audience. “And then ‘Lip Sync’ walks in the door.”

Indeed, “Lip Sync Battle” has provided the 15-year-old network its highest ratings ever for an original series, averaging 2.9 million viewers per episode and a 1.9 rating in the 18-49 demographic.

“Here you have something that is an off-shoot produced by a guy we all love,” Kay said of executive producer Jimmy Fallon, who developed the show with Casey Patterson, executive vice president of Viacom Entertainment Group, and brought it to Spike. “We felt like that was just a big opportunity.”

If “Lip Sync” is an unexpected springboard into a network-wide rebranding, then “Tut” is a strategic one. The three-part miniseries is a foray into the sex-and-battle territory that’s made “Game of Thrones” a cross-demographic hit — and a sharp turn for Spike into scripted programming.

Kay called “Tut” a linchpin for the network’s new direction, particularly with the casting of Oscar winner Kingsley as Vizier Ay, the prime minister to the young king (Avan Jogia). “That sent a message to the Hollywood community that Spike is here, and we’re real,” he said.

On Tuesday, the network announced a slew of new scripted series in development, including Bryan Singer’s “World War III,” the horror-drama “Bad Medicine” and the life-or-death courier adaptation “Mr. In Between.”

“It’s watershed moment for what our scripted can be,” Kay said. “If you’re going to call yourself a general entertainment brand, you have to deliver talent on a very high level.”

This fall’s “Sweat Inc.” fits that bill, according to Levy, a fitness competition series hosted by TV workout vet Jillian Michaels — think “Shark Tank” if it never left the gym. Michales and a panel will vet workout concepts to find the next Crossfit, Soul Cycle, etc.

The network also sees real opportunity in live events. Spike’s annual “Guy’s Choice Awards” is a celebrity buffet that attracts guy icons like Clint Eastwood, Robert De Niro and Liam Neeson. And “Rock The Troops” will follow Johnson to an international military base to throw a variety concert for the armed forces.

“We’re trying to crack the code a bit,” said Kay, noting that other networks have succeeded with everything from NBC’s live musicals to tightrope walking stunts. “We have to get it right for us.”

Getting it right means proceeding with caution. On Monday, the network staged live lip sync battles in New York City’s Central Park Monday between the “Broad City” stars Abbi Glazer and Ilana Jacobson as well as “Dancing With the Stars” alums Derek and Julianne Hough. The showdowns weren’t taped, but Kay said the event was a litmus test for possible live productions in the future.

Still, Spike has no plans to abandon its traditional boy-centric audience.

“We launched mixed martial arts (MMA) on Friday nights and ‘Lip Sync Battle’ delivers more young men than anything on this channel,” Kay said. “We’ve kept our young guys because we want them.”