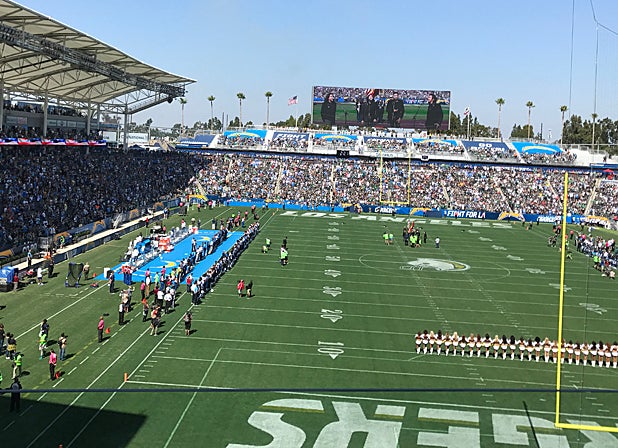 It’s been an eventful year for the Los Angeles Chargers but things are looking up for the city’s second NFL team.

After it was announced in January that the Chargers would be moving north from San Diego to L.A., Philip Rivers and his players are firmly settled in Carson, California, playing at the StubHub Center.

While some fans questioned the decision to play in a 27,000 capacity stadium that is most commonly used for MLS soccer (compared to the L.A. Rams’ temporary home of the Los Angeles Memorial Coliseum, which can fit over 93,000), TheWrap learned from two team executive why this is exactly what the Chargers need at this time in their evolution.

Moving an entire NFL franchise to a new city is no easy feat, even if it is only 120 miles directly north, as the Chargers organization learned when they packed up shop in the off season.

“It was a lot to take on at once, moving the team headquarters, finding a new place to host training camp, then of course, getting the StubHub Center ready to host NFL football,” A.G. Spanos, President of Business Operations and oldest son of Chargers’ owner Dean Spanos, told TheWrap. “That was three major projects on top of our entire staff relocating. It was just a lot.”

The Chargers originally called L.A. home in 1960, but having played in San Diego’s ailing Qualcomm Stadium since 1970, such a big change is a culture shock while they wait for the shiny new $2.6 billion stadium that they’ll share with the Rams opens in 2020. 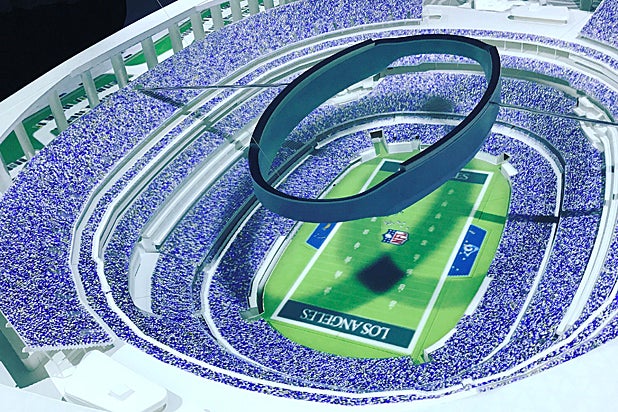 Now that they are settled — entering into Week 6 of the season with one win over the New York Giants under their belt — Spanos thinks the StubHub Center is the best possible location for them for the next three years.

“We’re here for the fans and they love the environment. It’s a small stadium but it keeps the energy inside the bowl,” he said. “We have really made an investment in the fan experience. We’ve added a new digital board, we’ve added a new ribbon board, which all play into the game presentation. We’ve been very pleased with the reaction from the crowd.”

While StubHub has been used for everything from soccer and the CrossFit Games to tennis and professional bull riding, there’d never been NFL played there before, but teaming up with entertainment and sports group AEG (which also owns the Staples Center) has been a huge help.

“AEG has been a great partner to work with, I give them a lot of credit for getting this stadium ready to host NFL football and to do it in such a way that the Chargers are home. It is a stadium that our fans can be proud of and enjoy coming to,” Spanos said.

Also Read: Roger Goodell: 'We Believe Everyone Should Stand for the National Anthem'

While there was the inevitable grumbles from San Diego natives when the team announced they were moving (including one upset fan who actually egged the team office), their original fan base is coming around as a new one is dawning.

“Word of mouth has been great, obviously the record kind of overshadows everything [the Chargers are 1-4 heading into Sunday’s game against the Oakland Raiders] but from a game experience standpoint, our fans have given us really high marks, which is great to hear,” Spanos said.

Mark Tamar, Vice President of Fan Experience, has been one of the people instrumental in making Sundays the best day of the week again, and he said the size of StubHub “adds a uniqueness to it — and it is also a strength for us because we get to touch our audience in such a quicker, easier and face-to-face way,” he told TheWrap.

“For example, when we blow off our flame towers, everyone can feel the heat of those flames. Our videos don’t need closed captions because people can read and see them, our audio is a lot easier to understand, and when we do shows at halftime, everyone is tuned to what is happening compared to other stadiums where things get lost,” Tamar explained.

The most challenging thing has been figuring out who our fan base is, he continued, “what gets them fired up and what gets them energized and supporting our team. It is building that home field advantage that every team needs.”

And to achieve that, “number one, you establish an entertaining environment for them, you make sure they’re informed on what is going on in the game, then you find the right times to ask them to bring out  as much energy as possible,” Tamar said.

“So third downs for example, on defense. That is when you need them to step up. So you choose your moments, you educate, then you put all that together and that is usually what gets them into what you’re doing and supportive.” 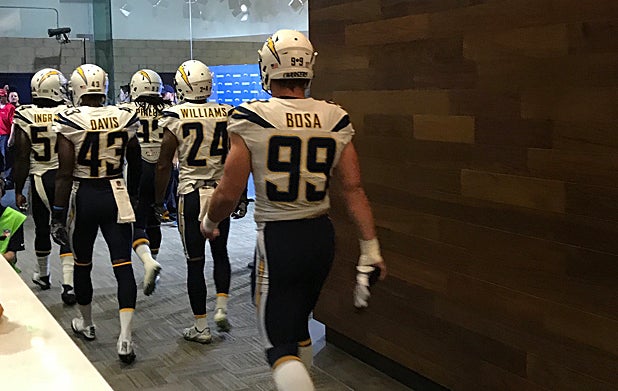 Those lucky enough to have access to the premium seats in the Jim Beam Champions lounge actually get to see the players walking past (within hands’ reach, but please, no touching!) onto the field, and really feel like a part of the action.

While many sports analysts — and even veteran QB Rivers — pointed out that there were a lot of Philadelphia Eagles fans in the house when then teams played earlier this month, the Chargers expected that. “L.A. is a melting pot,” Tamar told TheWrap, “There’s nothing wrong with opposing team fans. That builds energy, it gets people excited.

“And our Charger fans are a very proud group, so when they hear other fans cheer, you’ll see them come back loudly.” 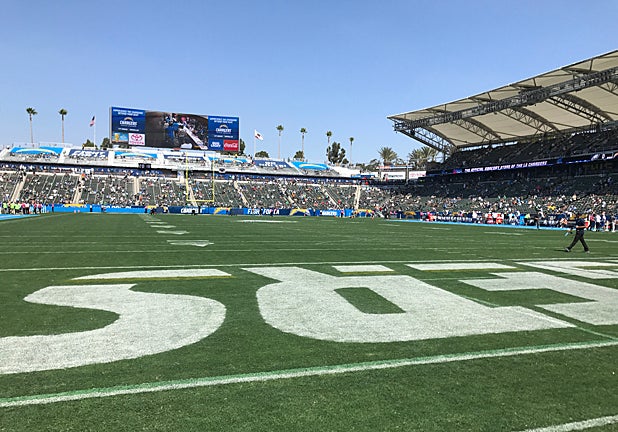 Helping the community has also been important, he explained. “Our players have done a lot for hurricane relief, they’ve been out in Hollywood doing canned food drives.”

Having Rivers, who has been with the Chargers for his entire career since joining the NFL in 2004, has been a huge benefit for a team in flux as well. “Philip is a rock for us, he is a perennial All-Star, an All-Pro, and is a quality human being. He is a great mentor to his kids, to the rookies on the team. He provides a lot of stability so we really rely on him.”

The Chargers upcoming joint mega-stadium with the Rams is already under construction and is set to dwarf even the Cowboys’ AT+T Stadium in terms of facilities and Hollywood glamour. And while “it will be an amazing building and we’re excited to be there, these three years at StubHub give us the opportunity to build a relationship the way we can’t do in a super big stadium,” Tamar said. “We’re able to get very tight with this fan base who we consider our best fans. As we develop that relationship, hopefully it will transfer into a new building.”

In the meantime, all NFL teams have had to respond to President Trump’s comments against players and the subsequent wave of national anthem protests, which A.G. Spanos described as “unprecedented times.”

“It was very emotional for a lot of our players, they were receiving directions from friends and loved ones on what to do or what not to do,” he said. “Ultimately our team stood arm in arm in a sign of unity. It is tough times and we’re looking forward to it bringing us together.”

The L.A. Chargers next face the Raiders in Oakland this Sunday at 1:25 p.m. PT.

Are you ready for a lot of football, Los Angeles?

Football is finally back in Los Angeles, with the Rams and Chargers set to ensure that their upcoming $2.6 billion stadium has all the Hollywood glamour and VIP amenities that you'd expect for A-list clientele along, with the football necessities for die-hard NFL fans. TheWrap recently got a sneak peek at the L.A. Stadium and Entertainment District -- check out the coolest aspects.