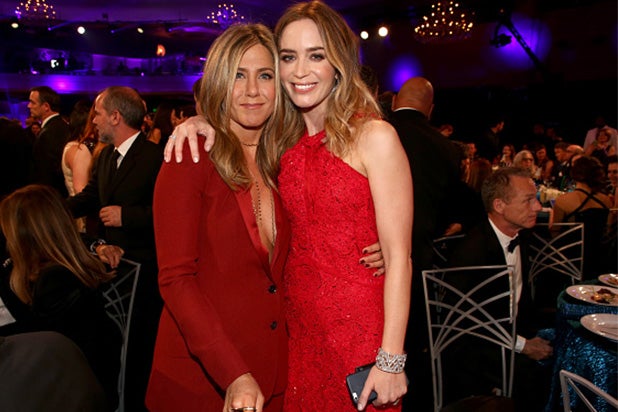 5:16pm
Professional courtesy rules the blue carpet. The Broadcast Film Critics Association invited lots of outlets to cover the 20th annual celebration and left plenty of space for them to do their jobs.

5:20pm
“Boyhood” stars Ellar Coltrane and Ethan Hawke speak to “Access Hollywood” and “Entertainment Tonight” side-by-side while rubbing shoulders. They have to shoot in opposite directions to avoid crossing shots of the competing shows.

The audience was not expecting this first half hour of non-televised awards. There is a weird vibe as people surprisingly shut up, sit down, and pay attention like it’s a televised show.

5:47pm
“Cake” producers Kristin Hahn and Mark Canton had their fingers crossed and were enthusiastic about Jennifer Aniston‘s chances for an Oscar nomination. “We’re good. Everything is great,” Canton curtly responded to a question about their disappointment.

5:56pm
Just as Angelina Jolie slides in next to Donna Langley, Alexandre Desplat comes over to say hi. “Stay, Stay….” he says as Jolie tried to get up. He leans in for a kiss.

6:12pm
Fox Searchlight co-president Steve Gilula is one of the only people not already on his 14th hour of the day. He has a superstition about sleeping in on Oscar nominations day and letting his wife read him the news, which was 20 nominations today. “39 more days (of campaigning),” he tells me.

6:37pm
Ethan Hawke shakes hands with security to get to Jolie’s table. The two are in nearly matching shades of Grey. It’s Hawke’s second year in a row at the show. Last year, he, Linklater, and Julie Delpy received the Louis XIII Genius Award for the “Before” trilogy.  Given for “unprecedented excellence in the cinematic arts,” tonight it’s going to Ron Howard who has a bottle of the cognac on his table. Howard is no newbie here, he previously won a Best Director Critics Choice award for “A Beautiful Mind” 13 years ago.

7:00pm
Lego movie’s Phil Lord tells me “I have 10000 new twitter followers since this morning.” He started the day with a shock Oscar snub but won the Critics’ Choice.

7:03pm
For all the begging for attendees to tweet, there is no WiFi inside the Hollywood Palladium. Awards show producers, get it together.

7:25pm
Jennifer Aniston (with fiance Justin Theroux) by her side tells Eddie Redmayne’s agent,  Josh Lieberman (CAA, who has been everywhere this awards season), he “looks great.”

7:28pm
During the commercial break before the Costner award, Cuba Gooding Jr. pretends to drink a full bottle of white wine through a straw.

7:47pm
While cutting through the crowd on his way back from the press room during the Best Director award, “genius” Ron Howard chuckles at the “Reverse Innarritu” joke. Apatow (a previous Louis XIII Genius) presented to winner Richard Linklater, also a previous winner.

8:00pm
After accepting and calling out Ethan Hawke, Michael Keaton fell off the stage as he was heading towards Hawke at stage left. The crowd gasped.