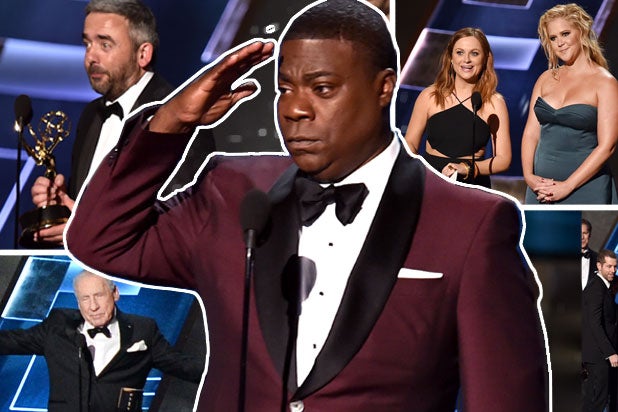 TheWrap’s Party Report was on the scene Sunday night at the Microsoft Theater in downtown Los Angeles to celebrate the 67th Emmy Awards, which aired live on Fox.

While millions of viewers laughed at host Andy Samberg‘s opening monologue and applauded at groundbreaking wins by Viola Davis, Julia Louis-Dreyfus and Jeffrey Tambor, a lot of the action took place behind the scenes.

Here’s what you didn’t see on the broadcast (all times are PT.)

2:57 p.m.
All Emmys ticket packets come with a yellow warning flier inside banning Selfie sticks, which read: “We all enjoy shooting Selfies at the Emmys. Due to safety concerns … Should you bring them, you will be asked to turn them over to Security, or return them to your vehicle.”

3:43 p.m.
Heidi Klum is the first star to hit the bars, which closed from 4 until 5:30 p.m. Cocktails cost $11, and “Orange is the New Black” prison warden Nick Sandow gets a double vodka.

4:53 p.m.
Telecast producer Don Mischer comes out to address the crowd and tells them that this show has more awards per hour than any other. “If you win, keep your eye on the prompter,” he advises. “This will let you know where you are in time. If we have to play music it is really disrespectful to all of us.” He also mentions that Ray Parker, Jr. (of “Ghostbusters” fame) is in the house band.

4:58 p.m.
The lights are flashing in the Microsoft and a voiceover keeps telling people to please take their seats. The Fox football telecast is about to throw over to the live show.

5:01 p.m.
The “Have you seen ‘Castle?'” joke from the Samberg opening package goes over huge in the theater, meaning he has already won over the room before he even appears on stage. The “We said goodbye to ‘True Detective’ even though it’s still on the air,” jab also lands well.

5:14 p.m.
As Amy Poehler and Amy Schumer take the stage for the first award of the night, we are past the first page of the script. The jib operator rips off the front page off the book, crumples it and tosses it in the trash. #1Down.

6:05 p.m.
“Veep” creator Armando Iannucci and his team are done with press and are about to return to the theatre when they are asked if their political consultant, a rising star in the Massachusetts state Senate and an Obama alum, also gets an Emmy, Iannucci says “he gets a chocolate one.”

6:13 p.m.
Colin Hanks and wild bearded man Will Forte (who lost out to Jeffrey Tambor in the Lead Actor in a Comedy Series category) are having cocktails in the lobby. “Dancing With the Stars” judge Julianne Hough walks by in the hallway and one fashion publicist mutters “best dressed … hands down.”

6:36 p.m.
During the montage of scenes from iconic series that went off the air this year, “Mad Men” creator Matthew Weiner is stuck in the 101 entrance hallway, watching from the back. Fox boss Gary Newman and power lawyer wife, Jeanne Newman, are right behind him.