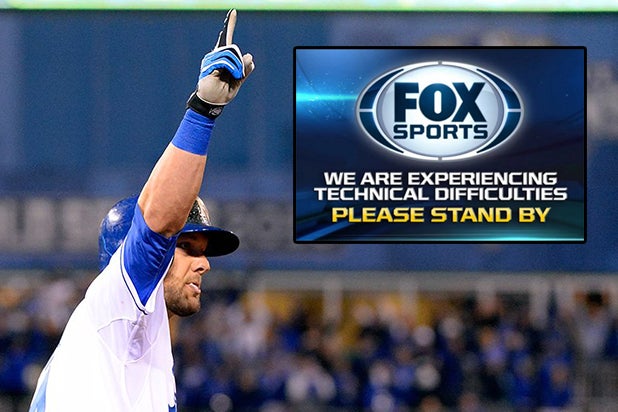 It takes a lot to stop a World Series.

In 1989, the Lorna Preita Earthquake disrupted Game 3 between the Oakland Athletics and San Francisco Giants just minutes before it was set to start. But on Tuesday night, something with far less precedent than a California tumbler briefly stopped Game 1 between the New York Mets and the Kansas City Royals.

Viewers watching at home found the broadcast interrupted when the generator that provided power to Fox Sports’ production trucks in Kansas City, Missouri, broke down. That shouldn’t have been a problem as Fox, like all other sports broadcasters, hauls a backup generator to all events. However, that also went down at the same time as the primary generator.

Fans at home missed only one at bat of the game, as Fox switched for more than 15 minutes to Major Leage Baseball’s international broadcast feed. Play was briefly stopped as officials decided whether or how to move forward without instant replay. still averaged total 14.9 million viewers, the most for a World Series Game 1 since 2010. And luckily for fans, it went on for 14 innings and lasted five hours and nine minutes.

Michael Davies, senior vice president of field and technical operations, at Fox Sports, spoke to TheWrap prior to Wednesday night’s Game 2 about what went wrong and what’s being done to prevent a similar interruption.

TheWrap: So what happened last night?
Michael Davies: About the fourth inning our generator went down. It’s a twin pack. It’s a set of two generators, a primary and a backup generator running in parallel. What happened is what we’re currently trying to find out. We’ve got some technicians from Caterpillar out here, who built the machine, and we’re running some tests on it today, taking some fuel and oil samples, figuring out what happened. But whatever did, it took out both engines, which isn’t supposed to happen. What’s supposed to happen is that if one of the engines is experiencing a default, the other engine can pick up the entire load. That’s obviously not what happened last night. At the moment, if you pinned me to it, I’d say it was some kind of electronic failure.

How is it that the two of them are linked in a way that one thing would be able to take out both generators?
It’s a good question, because normally this is exactly what you want to prevent when you’ve got a redundant generator. That’s why these types of things are so rare that we really haven’t encountered something like this. Exactly why what happened with one engine could affect the other and take the whole machine down is kind of what we’re trying to figure out now.

At what point last night did switching to MLB’s international feed come up as an option — or is that part of existing contingency plan?
It wasn’t improvised, no. We always know that when MLB international or any sort of post-feed is there, we can always go to that as a “break-the-glass backup.” We were lucky that the World Series actually accommodates an international feed. If this had happened on the LCS, it wouldn’t have been there. But it’s basically the last thing you’re expecting. So when it happens it takes one or two minutes to get your shorts on and get the wire over to the right place and make sure with our technical operations center in L.A. that everything is in place and put it back on. That took us about five minutes. Although it doesn’t sound like a long time, it felt like an eternity when we were on the ground.

Play stopped for part of that five minutes. What were the conversations like with MLB and how long would they have suspended play for?
The reason they suspended play was because replay was unavailable. When TV goes out, replay is unavailable. You’d have to talk to MLB, but it’s my understanding that they had to get the consent of both managers to continue without it.

What steps are being put in place to ensure there’s not a repeat of this?
That’s the primary thing on our minds here. The important thing is you don’t want to re-engineer every single thing and do something different from what you’ve done that’s supported you over tens of thousands of hours of programming. But what we’ve done is we’ve brought over another gen set that was actually headed to one of our college football games. We’re not doing anything entirely different than what we would normally do, but at the same time we’ve actually got a watchful eye on everything.

Hows something like this that takes out a whole broadcast?
It’s virtually non-existent. You can talk to any network, who really doesn’t have that much different of a power plan than ours, and while once in a while something might happen on set day or during the week, it usually for whatever reason doesn’t happen right when you’re up and running. That’s when you have all the switches on green and ready to go. So it’s virtually non-existent, which sort of speaks to the reliability of these machine. At the U.S. Open I had a gen set sitting on for three weeks with no issues to speak of. In this case, we try to put every single backup and redundancy in place. But one things for sure — we’ll get to the bottom of it and make sure that we’re not exposed to that again.