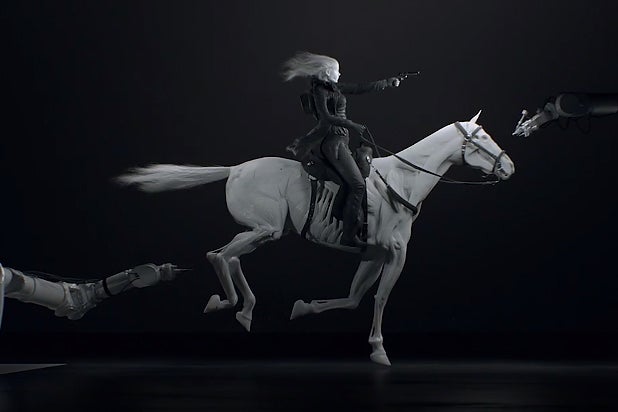 HBO’s “Westworld” is a tale of two realities: The rugged western frontier where human-like robots entertain human guests, and the scientists and business managers behind the scenes who make the park come to life.

The opening credits to the show, a monochromatic, sterile and beautiful rendering of how the life-like robots in the park are made, was created and executed by creative design company Elastic, led by creative director Patrick Clair.

Having been a lifelong fan of “Westworld” starting with the 1973 movie, Clair tells TheWrap how he pursued the opportunity to pitch his take on the main titles for HBO’s new version of the story, and collaborated with showrunners including Jonathan Nolan and Lisa Joy to come up with what we see on the show now.

“Certainly it’s not the same story that we ended up with,” Clair said of his team’s original pitch to HBO. “That story’s been developed with the team from the show, back and forth in many meetings within the past nine months or so. It was one of those shows that was a completely collaborative process, which is exciting, it doesn’t happen like that every time.”

Below, Clair discusses why he chose to focus on the trend towards more elaborate and organic main title sequences for TV shows, whether there are any Easter eggs to discover in “Westworld,” and what was real or not real — at least in those 90 seconds.

“Westworld” is set in two worlds, the real world with the science behind the robots, and the park itself. Why only focus on the scientific element in the main titles?
For me, the main theme in the show is where you see what could be totally believable versions of the wild west, and then something in it, it’s a little unsettling, there’s little tells that this is actually not the wild west. It’s really more of a re-creation of that image, a land that’s very much driven by vice and pleasure and people’s darkest desires. One of the things from the show that immediately stuck in my mind was the images of buffalo and animals being led around inside this very kind of cold, laboratory environment. There’s something very unsettling about those iconic elements of wild west storytelling, taken out of context and put into this scientific context, which felt very arresting and thought-provoking. So what we wanted to do was take those images — be it the galloping horse with the rider with the six-shooter, or the lovers from the brothel — and really put them in this completely sterile, robotic space.

How much was real and how much was CGI?
We were lucky that we came in at a point in the show where they had already filmed most of it, they had built the sets. They figured out the way the process [of building the robots] looked. I genuinely thought it was a very beautiful process, so I was keen to make sure we stayed true to it. A lot of times what we do is abstract in reflecting the themes in the show, but here, the figures, strung up on a circle, dipped into this beautiful, translucent milk, were so cool looking. So I thought the best thing for us to do was to use those same elements. That being said, for technical reasons and scheduling reasons, we were not able to use the exact same objects. So we recreated all of that inside a computer so everything you see in the final product is completely CGI. In some cases, we used dailies and footage from the show to inform how those things look, while other things, like the player piano that’s at the heart of it all, we went and took photos of it until we could recreate it in the digital space.

Are there any Easter eggs in the credits or is it built to change and evolve with certain elements or changes on the show?
I’d get into a bit of trouble with HBO if I went into too much detail, but I can certainly say that we pored over every detail and element and nothing is in there by accident.

Are shows getting more elaborate title sequences in the wake of something like “Game of Thrones”?
In terms of trends, it’s towards the idea that main titles are a really important part of building up the tradition of a show. I watch HBO stuff through their online portal, Netflix is completely online, and I think this habit of watching shows outside of the networks, it’s really giving us the opportunity to do main titles that really become a bit of a sign post for coming back to the show.

Also Read: Where Was 'Westworld' Filmed? Your Guide to the Dizzying Locations (Photos)

One of my faovirte title sequences is “Silicon Valley.” It’s only 11 seconds long I think, but does a fantastic job of setting up the tone, the world we’ll be playing in. There’s a real emphasis these days on how main titles can really capture the real fingerprints of a show.