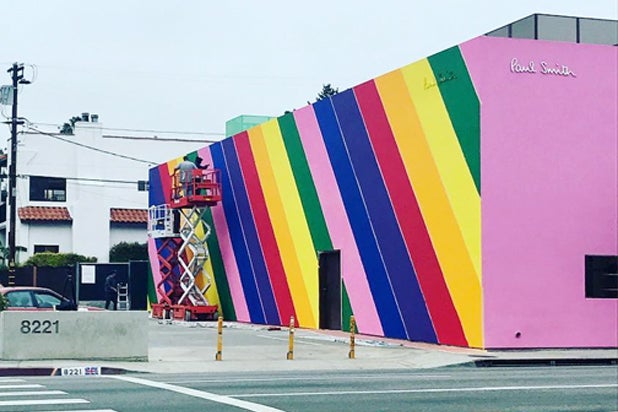 Filter IRL: The famed Instagram "Pink Wall" on Melrose has turned in to a rainbow to celebrate Pride month and the LGBTQ community. (Instagram/CarrieBauer)

One of these two landmarks just got a multi-color makeover.

Instagram and Paul Smith have partnered to turn the “Pink Wall” into a rainbow, marking the world’s first “IRL” (in real life) filter.

The west side of the Paul Smith store at 8221 Melrose Avenue — a photogenic monochromatic all in front of a parking lot — has become a 24/7 millenial tourist attraction in L.A. in recent years.

Along with the top of Runyon Canyon, the LACMA lampposts, the back of the Hollywood sign and TAO Group’s new “OMG” light marquee outside Avenue, it is one of the most Instagrammed places in the city, with groups gathering to snap selfies day and night.

For LGTBQ pride month, which begins Thursday, June 1, the wall did what celebrities do before a big media campaign — got some cosmetic work done.

“The most powerful element of Instagram is its diverse, global community, which connects and shares a vast range of passions and experiences,” the social media company said in a statement. “We are committed to fostering a supportive and kind community where everyone can feel free to express who they are.”

The primary network of youth culture wants visitors to post “#KindComments” at the wall, framing the pop-up as an antidote to the missives that drive Jimmy Kimmel’s “Mean Tweets” segments.

Brandy, Chromeo, and ILOVEMAKONNEN will perform at the L.A. Pride festival in West Hollywood on the weekend of June 9-11.

Before 'S-Town': 12 Times LGBT Status Was Used as a Plot Twist or Punchline (Photos)

Movies, media and television have a bad history of using gay or trans characters as a shocking plot device or hilarious joke, rather than treating sexual orientation or gender identity as a fact of life.