Instagram just made it a little easier to fit in watching your friend’s Stories while at work.

The popular photo sharing app continued its aggressive expansion of Stories — which allows users to post pictures and videos with a 24-hour time limit — on Thursday, announcing the feature is now available on its desktop website. Some users will will be available to see Stories on their computer starting today, with the rollout hitting all of its users “in the coming weeks.” Instagrammers will also be able to add to their Stories directly from desktop later in 2017.

Just like on mobile, users will see their Stories on the top of the screen, and can tap left and right to jump back and forth between pics. 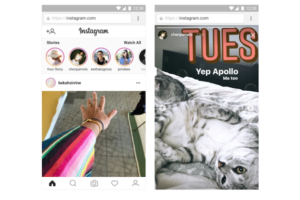 The move is another step towards ubiquity for the Facebook-owned app. Instagram Stories has raced past its chief competitor (and source of inspiration for nearly all of its features) Snapchat when it comes to daily active users, swelling to more than 250 million DAUs this summer. Adding a desktop option — despite its archaic vibe — will only help Instagram continue to drive views and generate ad revenue. It’s also a differentiating factor from Snapchat, which is only a mobile platform.

But more importantly, this move could give it an international boost. More than 75 percent of Instagram’s users are outside the U.S. With mobile still spotty in several parts of the world, it’ll allow more Instagrammers to use the feature away from their phone.