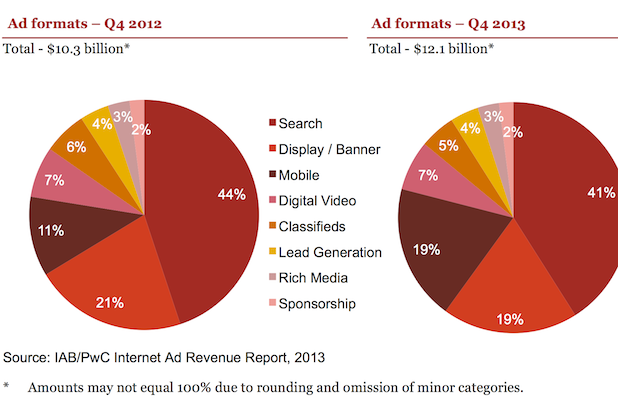 In the battle of the small screens, internet advertising may have the upper hand, according to a new study commissioned by the Interactive Advertising Bureau.

Banner ads, mobile spots and digital video teasers drove interactive advertising revenues to a record-breaking $42.8 billion in 2013. That figure eclipsed the $40.1 billion that broadcast television advertising racked up last year, marking the first time ever that digital has trounced that particular sector of the traditional media landscape.

At this point it should be noted that IAB, which is comprised of media and technology companies involved in digital advertising, has a dog in this fight — and that the report does not factor in cable advertising.  As the Wall Street Journal points out, television advertising across broadcast, cable, syndication and other ancillary platforms still bests digital ads and accounted for $66 billion last year.

Mobile comprised 17 percent of 2013 revenues, compared with 9 percent of revenues in 2012, making it clear why social media giants such as Yahoo! and Facebook have relentlessly beat the drum about the future being a smart phone and tablet-enabled one.

See video: Hollywood Torrent: YouTube Could Finally Have a Rival – In Comcast

“The news that interactive has outperformed broadcast television should come as no surprise,” Randall Rothenberg, President and CEO of IAB, said in a statement. “It speaks to the power that digital screens have in reaching and engaging audiences.”

Rothenberg went on to state that the ubiquity of smartphones and internet-connected devices were reflected in the strides made by mobile advertising.

The study was prepared by PricewaterhouseCoopers.