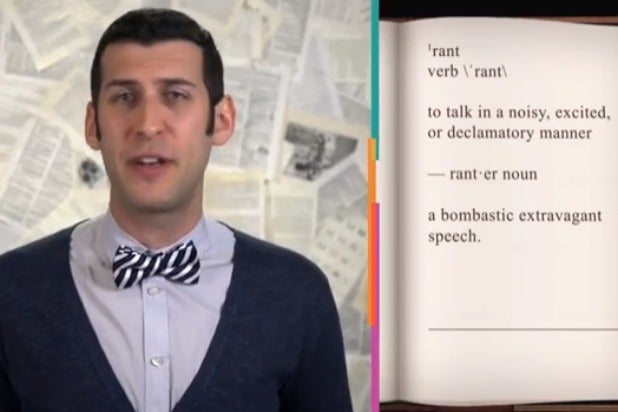 “Bongo Bongo” is starting its run with a look at the word “rant.” Would you believe it’s related to the word “run”? And that the internet has changed ranting perhaps forever? It’s all in the video, below.

PBS Digital Studios announced the new shows Monday. They will a lineup of series including Webby-Award winning “PBS Idea Channel” hosted by Mike Rugnetta, “Blank on Blank,” which animates lost interviews from icons including Grace Kelly, John Lennon, Tupac Shakur, and the science show “It’s Okay To Be Smart.” PBS Digital Studios also offers more than a dozen co-productions with PBS member stations across the country.

Also read: PBS Wants You to Meet the Immigrants Who Clean Our Skyscrapers (Video)

“Bongo Bongo,” and “Food Buzz” launched Monday, and are part of a partnership with Magnet Media.

“Expanding onto digital platforms has opened up new and exciting ways for PBS and our member stations to fulfill our mission of using the power of media to educate, engage and inspire the American people,” said PBS President and CEO Paula Kerger. “Through PBS Digital Studios, we are able to reach even more Americans with smart, original content that engages people’s curiosity about the world around them.”

“Frankenstein M.D.,” the first scripted series for PBS Digital Studios, will premiere eight episodes later this year. They will follow the obsessive, eccentric Victoria Frankenstein through her medical experiments, conducted on her YouTube channel.

“Pancake Mountain,” created by filmmaker Scott Stuckey, will launch this summer. The series, which targets kids and parents alike, has featured artists including Kings of Leon, Jason Mraz, The White Stripes and Katy Perry

In the first episode of “Bongo Bongo,” host and writer Ethan Fixell looks at the the root of the word “rant” and some of the most memorable rants. “Food Buzz” host Chris Hauselt, meanwhile, explores sriracha.

Watch the premieres of “Bongo Bongo” and “Food Buzz” below: