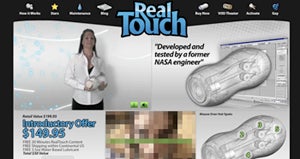 The adult entertainment business was once grudgingly acknowledged as a pioneering industry that led the way for innovations later emulated by Hollywood – first to adopt video, and first to embrace the Internet, among other things. Now the adult industry is being hit hard by piracy, and what happens could be a harbinger for Hollywood.

But while speaking at the conference at the Warner Center Marriott on Tuesday, Flynt admitted the request was ludicrous, adding that he is “anti-stimulus and anti-bailout.”“I’ve got a solution for all these companies [that are asking for bailout money]; it’s called bankruptcy,” he said.

About a year ago, it became evident that the rise of Tube sites could harm the industry in a big way. Illegal tube sites siphon content from various locations, putting it up to create traffic. Owners of these sites can make quick money by featuring advertising from dating websites or live-cam websites.

According to the Digital Millennium Copyright Act, internet service providers who host the video content but don’t create or modify it have some immunity from the federal law. A safe harbor clause included in the DMCA largely protects webmasters from being charged with copyright violations, making it difficult for adult content producers to police pirated videos.

Though those content producers could file a free copyright infringement notice with the service provider which would require their video to be taken off the third-party site, many opt not to do this or simply do not have the time and money required to track down where their pirated content is being posted. To make matters more complicated, many individuals who run Tube sites are often living in other countries, and thereby not subject to U.S. law.

Lawrence G. Walters, a lawyer who deals with first amendment issues and is a partner with the largest firm focusing on adult entertainment clients, believes it would be effective to slap some of those downloading illegal content with lawsuits, much like the Recording Industry Association of America did up until recently to try and curb illegal music downloads.

But others like Stephen Yagielowicz, the managing editor of XBiz, say the hype over Tubes is overblown, noting that those who visit the sites aren’t the type of consumers who would pay for content anyway.

Yagielowicz believes that a majority of the Tube sites will soon shut down because the cost of running them and paying for their large bandwidths can be up to hundreds of thousands of dollars – money that isn’t being recouped by a couple of ads.