Over the past year, Europe has become a minefield for internet piracy.

"Europe is above and beyond other places both in terms of piracy and its thirst for American content," Pam Allison, head of business intelligence division DtecNet, a provider of piracy-detection services, told TheWrap. 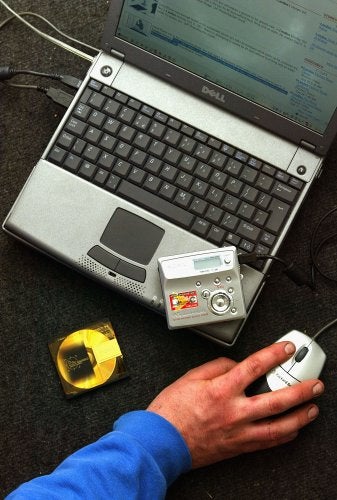 Indeed, recent studies have shown just how bad the problem is. Television piracy, for instance, increasing fourfold over the fall, according to a recent study by DtecNet. And a report by Forrester Research found that a staggering 14 percent of European internet users engage in illegal file-sharing.

Part of the reason, is that there are a lot of English language speakers — not just in the U.K., but in places like Spain and Italy. And there is a seemingly insatiable appetite for American popular culture.

Among the moves embraced in countries like France and Sweden are so-called "three-strikes" rules that disconnect illegal downloaders from their networks after two warnings. Also in France, those who violate intellectual property rules risk imprisonment of up to two years and face a fine of $415,000.

And in England, there is pressure to get legislation effectively adapting the three-strikes approach passed before elections are held. Prime Minister Gordon Brown’s Labour government, which has been supportive of the move, is widely expected to get the boot.

As in the U.S., such moves have drawn fire from groups who claim that stricter rules cater to large multi-national corporations at the expense of individual rights.

In England, for example, a full 33 percent of participants in a recent poll said they would vote against a party that support internet disconnection for copyright infringement.

“People’s rights are at stake," Jim Killock, executive director of the Open Rights Group said in a statement. "The bill doesn’t require any test of evidence before harsh punishments are imposed on people accused of copyright infringement, and opens the door to a ratcheting up of unwarranted powers without democratic scrutiny.

"You’re not banned from using telephones, postal service, just the internet," said Christian Engstrom, a member of the Swedish parliament who opposes the legislation. "The internet has become a fundamental part of society, and it must be treated as such. Politicians and record companies see it as a toy you can take away from a child misbehaving. It’s unreasonable to shut anybody off."

Engstrom and other like-minded Swedes have been so incensed over the new rules that they have formed a political group called the Pirate Party, which numbers 50,000 members, making it the third largest party in Sweden. It currently has two members in the European Parliament.

Supporters of the harsh rules dispute the complaints of critics like the Pirate Party and Open Rights Group.

"We’re engaging in a public education program," Geraldine Moloney, a spokesperson for the Motion Picture Association in Europe, told TheWrap. "People are being told that they’ve been accessing something illegal, and they are given an opportunity to change their behavior."

Europe’s decision to crack down on piracy has yielded some successes, notably the closure of Pirate Bay, which was one of the most notorious and heavily used sites for illegal downloading.

Yet those who feel that the new stricture violate a fundamental right for citizens to use the internet point out that it is a seemingly intractable problem that won’t go away so long as there is an interest in content.

Individual countries’ efforts to get tough have been further bedeviled by the European Union. At the end of last month, the EU rejected a move to implement "three strikes" policy across member nations, and endorsed new telecom rules that allow Internet users to appeal to national courts if they are cut off for illegal file-sharing.

"It’s a confusing situation," Lars Diemer, chief operating officer at DtecNet, told TheWrap. "The union bases all laws on the free movement of goods, people and information, so it is wary of stricter penalties. Yet every country that’s in the union has to implement and ratify a different set of rules locally. These fundamental principles appear to be working against each other."

Without the wider support of these member countries, studios’ attempts to rein in piracy could prove impotent, analysts said. Outside of the U.S., Europe has the highest level of broadband penetration, and nearly 15 of the countries in the union have ready access to high-speed internet.

Part of the problem for studios in making the case for a more serious crackdown on illegal downloads is that it’s not immediately clear that the harsh punishments are significantly reducing piracy.

In the days following the implementation of tighter rules, Swedish internet traffic was down 30 percent. More recently, however, there have been reports that piracy has actually increased in Sweden and that file sharing is up 300 percent since last spring.

France, which has instituted some of Europe’s strictest laws regarding piracy, remains one of the top four European countries in terms of illegal downloads.

"If you look at these oppressive laws, the amount of downloading may drop intermittently, but then it will start again," Engstrom said. "In six or 12 months it will be back at previous levels. You can’t stop people from sharing culture. It’s part of human nature."

Even the law’s supporters acknowledge the impossibility of stopping downloading entirely.

"People will always find a way to get this material and there are becoming more and more ways do it anonymously," Allison said. "If one site shuts down, people are just migrating to different places are they’re just streaming directly."