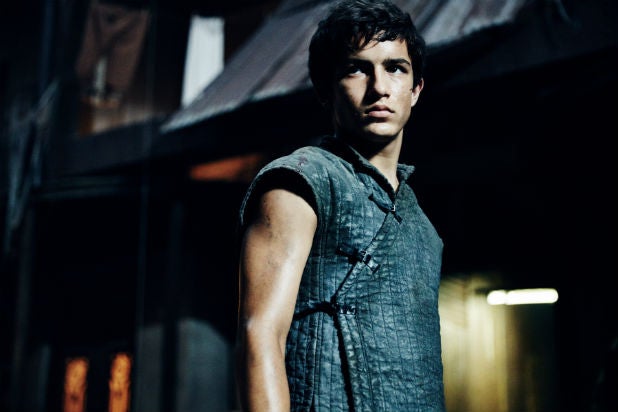 (Spoiler alert: Do not keep reading if you have not seen the season finale of “Into the Badlands”)

The season finale of “Into the Badlands” was filled with twists, betrayals, and more kung fu badassery than you can shake a stick at.

Sunny (Daniel Wu) tries to trick the River King (Lance E. Nichols) by giving him the head of the colt who died in the end of the last episode instead of M.K.’s (Aramis Knight). The River King seems to accept the offering, but tells Sunny if he wants out of the Badlands, he must be on the next ship out at midnight.

“Sunny was looking for the easy way out,” series co-creator and showrunner Alfred Gough told TheWrap. “Even the terms of his deal with the River King, he was trying to cheat. And the fact is there is no easy way out.”

See video: Quinn Brands Sunny as a Traitor in 'Into the Badlands' Clip (Exclusive)

Sunny returns to The Fort, but Quinn (Marton Csokas) is waiting for him. Quinn knows there is a traitor inside the walls, and he has Sunny arrested. Quinn then takes M.K. under his wing and promises him he will spare Sunny and give him Tilda (Ally Ioannides) if M.K. will fight for him.

“At the core of the series is really–it becomes a journey of spiritual enlightenment,” Gough continued. “I think this six-episode season is about Sunny waking up. At the beginning he’s very much part of the power structure and literally enforces it. So in a way he’s this incredibly powerful person but he’s sort of dead inside.”

Elsewhere, Ryder (Oliver Stark) finalizes his plans to kill his father, but also to double-cross The Widow (Emily Beecham). He also relishes the moment as his mother, Lydia (Orla Brady) is escorted out of The Fort when Quinn suspects her of poisoning Jade (Sarah Bolger).

Also Read: 'Into the Badlands' Star Oliver Stark on Ryder's Choice: 'Enemy of My Enemy Is My Friend'

With nowhere else to go, Lydia returns to the camp of her father, the holy man Penrith (Lance Henriksen). She pledges to rededicate herself to her faith and to never leave his side again.

Veil (Madeleine Mantock) is preparing to leave with Sunny, but she is kidnapped and taken to The Widow’s compound before she can. The Widow is suffering from her wound at Sunny’s hands and needs Veil’s help if she is to survive.

To insure her safety, Veil lays out three bottles. One contains medicine, the other two contain poison. She says she will reveal which bottle is which once she is home safe.

Tilda escorts her home, when Veil tells her that The Widow is no better than Quinn. She reveals which bottles are poison, but says Tilda must decide what is the just course of action.

Quinn escorts M.K. into town, where they are ambushed by Jacobee (Edi Gathegi) and his clippers, along with Ryder and Zephyr (Ellen Hollman). Quinn cuts M.K. and releases his power, leading M.K. to decimate the clippers. Jacobee dies in the melee, while Zephyr is thrown against a brick wall. Ryder manages to escape.

Quinn watches the fight from nearby, but Sunny appears and runs Quinn through with his sword. According to series co-creator and showrunner Miles Millar, attacking Quinn is Sunny finally waking up.

“[Sunny’s] almost been brainwashed by this incredible man, this charismatic man that he’s seen as a father figure since he was a boy,” Millar told TheWrap. “In the finale, he’s able to run him through with a blade, which is his liberation. Unfortunately, he then gets his ass kicked and taken prisoner.”

Indeed, a group of abbots sent by Penrith arrive and subdue M.K. Sunny valiantly fights to save him but ultimately fails. As the episode ends, we see that Sunny has been taken prisoner by the River King, who knows Sunny tried to trick him. He plans to sell Sunny to the highest bidder.

Also Read: 'Into the Badlands' Star Emily Beecham on Fight Scenes: 'All the Sweat Is Completely Real'

M.K. is locked in a trunk (just like in the first episode) and is driven by the abbots to an unknown destination at the edge of  desert.