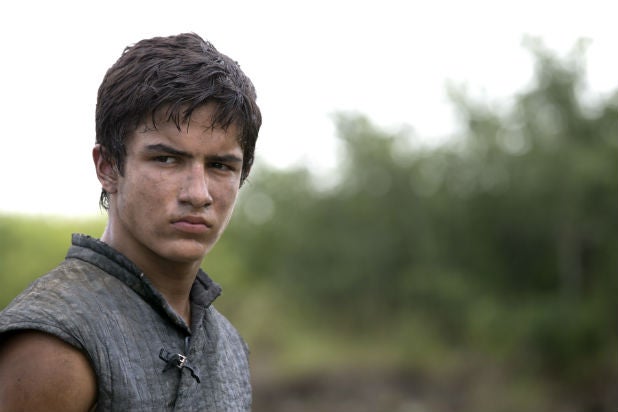 (Spoiler alert: Do not keep reading if you have not seen Sunday night’s episode of “Into the Badlands”)

This week’s episode of “Into the Badlands” opens with Sunny (Daniel Wu) sparring with M.K. (Aramis Knight) on top of the gate into The Fort.

In what turns out to be a dream, Sunny confronts M.K. about his power and if he is aware that while under the influence of that power he killed a group of cogs with whom he was traveling. Knight said filming the sequence was the toughest stunt he has had to perform on the show thus far.

“So you’re up 50 fifty feet in the air, me and Daniel, and we had to perform about a 40-step fight sequence, which was pretty tough,” Knight told TheWrap. “We got it done in only a couple of takes but it took fully applying ourselves.”

Also Read: 'Into the Badlands' Star Oliver Stark on Ryder's Choice: 'Enemy of My Enemy Is My Friend'

M.K. and Sunny then go out in search of The Widow (Emily Beecham), but instead find only Tilda (Ally Ioannides). M.K. asks Sunny to let her go, but Sunny insists that they take her back to The Fort to interrogate her.

Last week, we saw that M.K.’s love for Tilda was the only thing that allowed him to control his power. Knight believes that Tilda’s presence offers M.K. a sense of normalcy.

Later in the episode, Ryder (Oliver Stark) seeks answers about the medallion that he took off of M.K. He seeks out his grandfather, The Preacher (Lance Henriksen). After they talk and Ryder leaves, The Preacher tells one of his disciples that a “dark one” (meaning M.K.) is in The Fort and must be destroyed.

Quinn (Marton Csokas), meanwhile, realizes he cannot complete his opium harvest without the cogs The Widow has lured away. Jade (Sarah Bolger) suggests that the clippers and their colts could complete the harvest instead.

Quinn agrees, but suffers a debilitating headache thanks to his brain tumor while addressing his men. He puts Jade in charge of leading the harvest. To Jade’s surprise, Lydia (Orla Brady) agrees to help as well. The two seem to get along, but Jade collapses from an apparent poisoning later on while talking with Quinn.

Also Read: 'Into the Badlands' Star Emily Beecham on Fight Scenes: 'All the Sweat Is Completely Real'

In The Fort’s dungeon, Sunny prepares to interrogate Tilda, but The Widow arrives to stop him. While they fight, M.K. tries to set Tilda free but is stopped by another colt. Rather than let the other colt kill Tilda, M.K. cuts himself and uses his power to kill him. In the confusion, The Widow and Tilda escape.

The episode closes as we see that Quinn has witnessed M.K. using his power. No doubt the ruthless Baron will want to use the boy as the weapon, just like The Widow. But who is truly the lesser of two evils?

“I would say The Widow [is the lesser of two evils],” Knight said. “In our series, there really are no protagonists or antagonists. The writers and editors don’t make it really clear who a good guy or a bad guy is. Really it’s going to be left up to the audience, but I think The Widow is a little less bad than Quinn because he killed Veil’s parents for no reason.”