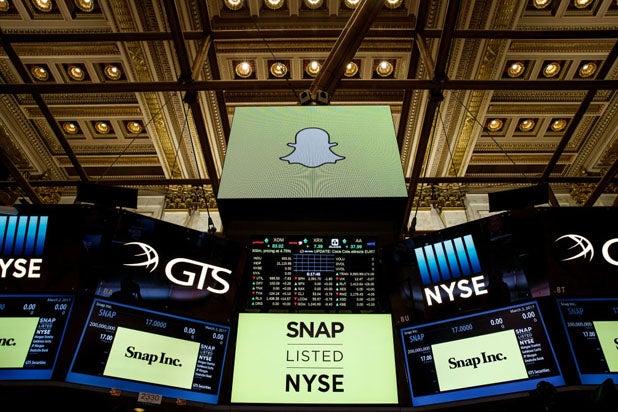 Wall Street has gone crazy for disappearing message company Snap Inc., sending its shares up 44 percent from its $17 offering price on its opening day and nearly another 10 percent through late afternoon trading Friday in the biggest tech IPO since Alibaba.

Brian Wieser, an analyst at Pivotal Research, gave Snap a $10 price target — a 194 percent discount from its Friday high of $29.44 a share.

Wieser called Snap “a promising early-stage company,” but one that has to deal with tough, deep-pocketed competitors and slowing growth

Snap is “an upstart facing aggressive competition from much larger companies, with a core user base that is not growing by much and which is only relatively elusive,” Wieser wrote in a Thursday research note.

He also had concerns about the lack of voting rights Snap’s shares have, particularly with its two twenty-something founders, Evan Spiegel and Bobby Murphy, who are effectively driving the bus by themselves.

“Investors also will be exposed to what appears to be a sub-optimal corporate structure operated by a senior management team lacking experience transforming a successful new product into a successful company,” Wieser wrote.

Nomura Instinet analyst Anthony DiClemente set his price target for the company at $16 a share, $1 below its IPO price. In a Thursday note, DiClemente warned that Snap’s total user and revenue per user growth had begun to “meaningfully slow,” and its current valuation is at a premium that is tough to justify.

“We see Snap’s opportunity as constrained relative to expectations and, as such, we think shares are fairly valued at best at the IPO price,” DiClemente wrote.

Also Read: 3 Reasons to Love Snapchat IPO -- And 3 Reasons Not to

Susquehanna initiated its coverage of Snap with a $22 price target — higher than Pivotal and Nomura, but still well below where Snap is currently trading.

“Euphoria could cause a short-term disconnect between fundamentals and valuation, but longer-term we struggle to see Snap as an investment with meaningful upside potential from current levels,” Susquehanna analyst Shyam Patil wrote in a Friday note. However, Patil said there could be some upside in the short run, saying that he “wouldn’t be surprised to see euphoria take the stock into the high $20s to low $30s.”

“Let all the hot air go out, let the private investors cash out, let’s see how the industry evolves in 1.5 years,” he wrote.