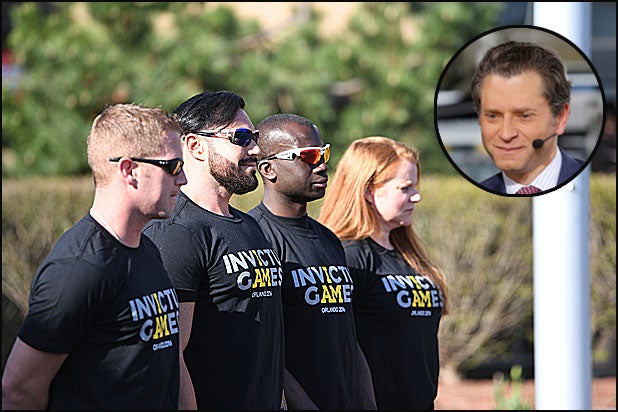 Invictus Games creator Prince Harry has already dragged his 90-year-old grandmother Queen Elizabeth into trash-talking the Obamas, and there are sure to be more viral videos to come when ESPN airs more than 40 hours of live coverage of the sporting event from May 8-12.

After debuting in London in 2014, the latest multi-sport event for wounded, ill and injured servicemen and women is now being held at the ESPN Wide World of Sports Complex in Lake Buena Vista near Orlando, Florida.

TheWrap caught up with ESPN journalist and eight-time Emmy Award winner Jeremy Schaap before he headed to the Sunshine State to not only cover the Games, but also take part in a special symposium with Prince Harry and former president George W. Bush.

Also Read: ESPN's Jeremy Schaap Marks 25 Years of Scoops on 'Outside the Lines'

“I am excited to be part of the coverage as it is a chance to honor these men and women who have done so much,” Schaap told TheWrap.

“These competitors are all there because something unfortunate has happened. They are competing as a way to rehabilitate and to give purpose after a trauma — either physical or emotional. It really is about giving these competitors a chance to tell their stories, and be paid back for serving their countries,” he said.

The Invictus Games were created by Prince Harry after he visited the Warrior Games in the U.S. in 2013. Prince Charles and Diana’s youngest son retired from the British Army in 2015, after serving for 10 years and doing two tours in Afghanistan.

There are currently 14 countries and 500 athletes competing in 10 events held during the four-day Games, which features sports including swimming, track and field, archery, power-lifting, cycling, wheelchair basketball and wheelchair rugby.

“Clearly, the patronage of Prince Harry has been invaluable to the brand of these Invictus Games,” Schaap said. “Anything he is involved in gets attention and he’s invested a lot of time into it.”

Along with personal profiles on athletes, the “Outside the Lines” and “E:60” correspondent has the big task of taking part in a forum with Harry and Bush about the invisible wounds of war.

“Some of these competitors don’t have physical wounds — they suffer from psychological, emotional, stress or brain injuries that you do not see. A part of the symposium is about is dealing with the stigma associated with these kinds of wounds, which is very real,” he explained.

Having covered both the Olympics and Special Olympics numerous times, Schaap said the Invictus games offers the opportunity “to tell deeply personal stories. You don’t have to ham it up.

Live coverage of the Invictus Games begins Sunday, May 8, at 8 p.m. ET on ESPN and continues through May 12.

Unfortunately for you @FLOTUS and @POTUS I wasn't alone when you sent me that video ???? – H.https://t.co/sjfSQvkzb6

Everything looking great @InvictusOrlando pool. What a fantastic set up! ???? pic.twitter.com/VFHPIPQBoe

A first look around @InvictusOrlando for Prince Harry, meeting some friends along the way. pic.twitter.com/sYrdor80RN

Looking forward to seeing plenty more friends and families over the next week. #WeAreInvictus #Support pic.twitter.com/QYlcIU5Qs3