It may not have won over the Academy, but "Invictus" got a consolation prize on Wednesday from the Writers Guild of America, West.

The film’s screenwriter, Anthony Peckham, was named the recipient of the WGAW’s 2010 Paul Selvin Award, which recognizes "work which embodies the spirit of constitutional rights and civil liberties." 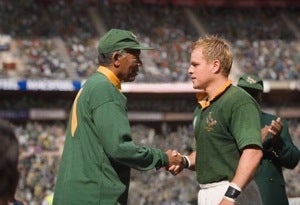 LOS ANGELES – Invictus screenwriter Anthony Peckham has been named the recipient of the Writers Guild of America, West’s 2010 Paul Selvin Award, recognizing written work which embodies the spirit of constitutional rights and civil liberties. Peckham’s work, along with other Guild honorees, will be recognized at the 2010 Writers Guild Awards’ West Coast ceremony on Saturday, February 20, in Los Angeles at the Hyatt Regency Century Plaza Hotel.

“Anthony Peckham’s screenplay for Invictus perfectly illustrates what the Paul Selvin Award stands for, expertly conveying how only a few men can unite to impact positive change, and have that change resonate around the world,” said WGAW President John Wells .

With a screenplay by Peckham, based upon the book Playing the Enemy by John Carlin, and directed by Clint Eastwood, Invictus is the true story of how Nelson Mandela (portrayed by Morgan Freeman) joined forces with the captain of South Africa ‘ s rugby team, Francois Pienaar (portrayed by Matt Damon), to help unite their country.

Newly elected President Mandela knew that his nation remained racially and economically divided in the wake of apartheid. Believing he could bring his people together through the universal language of sport, Mandela rallied behind South Africa ‘ s underdog rugby team, the Springboks, as they pursued their unlikely run to the 1995 World Cup Championship match. At first this was not a popular cause. The Springboks team, with only one black player, was seen as a symbol of apartheid to black South Africans and almost universally despised by them.

As a native of South Africa himself, screenwriter Peckham shared a tangible personal connection to the historic tale, giving him special insight into the story’s particular time and place. “Mandela realized he had a perfect opportunity to address the part of the electorate that had not voted for him…that, in truth, feared him. White South Africans followed the Springboks religiously, so to use the forum of the World Cup was brilliant. But it wasn ‘ t just a game; it was the fact that Mandela embraced a team that black South Africans hated and almost by force of will dragged all of the people into following them,” Peckham has said, noting why this uplifting true-life tale needed to be shared with a wider global audience: “While South Africans know this story, I don ‘ t think the rest of the world does. But it ‘ s not just a story for South Africans. To me, this is a story about leadership – not only Mandela ‘ s, but also that of the Springboks and others. True leadership is a rare commodity and should be celebrated when we find it.”

Peckham recently co-wrote the box-office hit Sherlock Holmes (screenplay by Michael Robert Johnson and Peckham and Simon Kinberg, screen story by Lionel Wigram and Johnson, based on characters created by Sir Arthur Conan Doyle). Currently, he is writing the screenplay for the undersea adventure thriller Deep Sea Cowboys for producers Alex Kurtzman and Roberto Orci. His upcoming film work includes the screenplays for The Tourist, based on the book by Olen Steinhauer and produced by George Clooney, and The Limit, based on the Michael Cannell book. Peckham’s previous writing credits include the suspense thriller Don ‘ t Say a Word (screenplay by Peckham and Patrick Smith Kelly, based upon the book by Andrew Klavan) and the Sci-Fi Channel miniseries 5ive Days to Midnight .

Peckham earned a degree in Political Science, Classical History and English at the University of Cape Town . He also received an Honors Degree in English Literature, studying the works of Raymond Chandler under Nobel Prize-winning author J.M. Coetzee. In response to apartheid and influenced by the writing of Chandler , Peckham left South Africa to study filmmaking in California at San Francisco State University , where he earned an M.A. in Film.

The Paul Selvin Award is given to that WGA member whose script best embodies the spirit of the constitutional and civil rights and liberties, which are indispensable to the survival of free writers everywhere, and to whose defense the late Selvin, who served as counsel to the Guild for 25 years, committed professional life. Previous recipients include Allison Cross, Gary Ross, Cynthia Whitcomb, David E. Kelley, Eric Roth, Michael Mann, Jason Horwitch, Don Payne, Robert Eisele & Jeffrey Porro, and most recently, Dustin Lance Black for Milk in 2009.