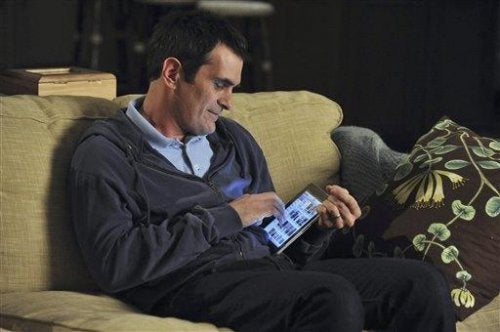 From all the media hand-wringing over Wednesday’s iPad-riffic episode of "Modern Family," you’d think the producers of the ABC hit had gone on some sort of Tiger Woods-style sex tour, cheated Conan O’Brien out a job and secretly traded arms for hostages.

Even though producers have flatly stated there was no compensation from Apple for the frequent mention and display of the iPad, some media scolds have worked themselves into a tizzy about the episode.

The Hollywood Reporter’s Live Feed blog accused "Modern Family" of selling out: Saying it "presents itself as a high-class show," it slammed producers for "water(ing) down a brand with perception of selling out… especially if it didn’t sell out." The blog stopped short of demanding producers return their just-awarded Peabody Award, but did imply that this sort of "garish" behavior somehow is beneath "Modern Family."

CNET, which is owned by ABC rival CBS, also attacked.

"This was less of a product placement and more of a product kidnapping a show and holding it by the neck very tightly indeed until it handed over a pile of money," blogger Chris Matysszczyk fumed, apparently not feeling the need to call anybody associate with the show or Apple to see if this was in fact a paid integration. "Even the Apple store was featured. And I am sure that Steve Jobs being the largest shareholder in Disney, via the Pixar acquisition, had no influence at all in the creation of this work of art."

It’s one thing to find a plotline unfunny or subpar. There’s also nothing wrong with making note of the timing of the episode, or of raising the question of whether a company paid to have its product integrated into a show.

Hot TV shows generate buzz, both positive and negative. We get it — and we’re not trying to condemn anyone for identifying something interesting about a show.

But until somebody uncovers evidence to the contrary, this was simply a case of writers trying to make a 2010 half-hour comedy relevant to a sophisticated audience. Viewers in the 1950s or even the 1990s might have laughed at a reference to a fake "MyPad" or "iTablet." Not now.

And if you’re trying to tell a story about a character irrationally lusting over a tech product circa spring 2010, spoofing the iPad was the obvious (and reasonable) choice. If it had been spring 2009, Phil would no doubt be praying for a Kindle. And if it were 2011, he’d probably be begging for a 3-D TV set.

This isn’t the first time media writers have lost their minds hyperventilating over alleged product placement. Or even the first time an Apple product has been the subject of said kvetching.

During the second season of "The Office," conspiracy theorists everywhere were convinced that Steve Jobs ordered Greg Daniels to work a video iPod into the Christmas episode of the show. In fact, the company had nothing to do with it — and it turned out NBC and "The Office" benefited a lot more (NBC began selling its shows on iTunes right around the same time millions of Americans got their first video iPods. "The Office" was a perfect demo match for the early adopters hungry for content to load on to their new gadget).

What’s ironic is that an earlier example of product placement by "Modern Family" drew virtually no media response. A few months ago, Toyota paid to have the Dunphy family talk to each other while riding in — and making mention of — their brand new Sienna. The Toyota love wasn’t subtle — but it was clever. And viewers somehow survived.

Here’s the thing: Let’s say 20th or ABC had collected money from Apple for Wednesday’s iPad lovefest. So what?

Networks are losing millions thanks to viewer erosion from DVR usage that causes endless amounts of TV advertising to go unwatched. Cable operators are forcing networks to beg for their fair share of subscription fees. And increasingly, viewers think they should be able to watch shows ad-free online.

If product integrations are a means for networks and studios make ends meet, so be it. Viewers — not the nattering nabobs in the media — can decide for themselves if a show too frequently sacrifices storyline quality in order to shill.

Until then, consider iPad-gate yet another media-generated Non-troversy.