The Defenders will continue to cross over even after their big event, with Danny Rand — a.k.a. Iron Fist — showing up in “Luke Cage” Season 2.

Entertainment Weekly has an exclusive photo that shows Rand (Finn Jones) and Cage (Mike Colter) talking in what appears to be a serious discussion.

You can check out the image below. 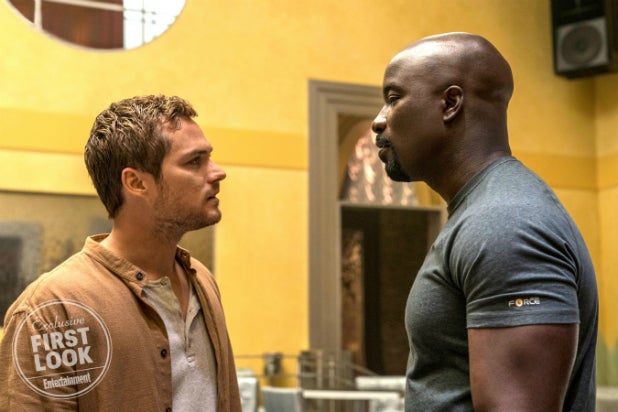 The addition makes sense, since in the comics, Luke and Danny are best friends and frequent colleagues who work together in the Heroes for Hire. In “The Defenders,” the two meet for the first time and begin to form a friendship. However, at the end of the eight-episode season, the group parts ways. Jessica Jones will be returning in a second season of her standalone show sometime in 2018 as well.

Details are being kept under wraps about “Luke Cage’s” second season. We know that Lucy Liu will be directing the season premiere and that Simone Missick, who plays Misty Knight, will be returning. After her painful end in “The Defenders,” she’ll be getting her famous bionic arm, another move that puts the Netflix Marvel universe closer to the comics.

So it’s still unclear if Rand will be appearing in a cameo or will have a bigger role in the story. After the battle at Midland Circle, he went off — complete with his iconic green and yellow colors — to defend the city in Daredevil’s place, something he had been struggling with all season. Considering how close he and Cage are in the comics, and this new role, we assume he’ll appear more than once.