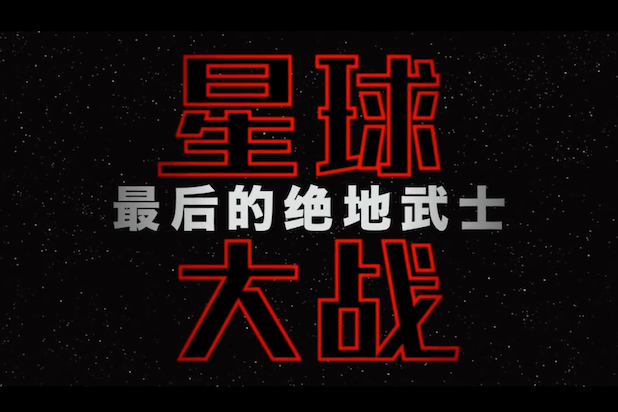 After grossing over $1.1 billion worldwide in three weeks, “Star Wars: The Last Jedi” is getting its release in China this weekend. But unlike the rest of the world, where Luke Skywalker and the Jedi have become cultural mainstays for 40 years, success in the Middle Kingdom is far from a guarantee.

When “Star Wars: The Force Awakens” was released in China in early January 2016, it opened to $52.3 million and grossed $124.1 million, making it the second-highest earning international market for the film behind the U.K. and accounting for 11 percent of the film’s $1.1 billion overseas haul.

The following year, the anthology film “Rogue One” made $69.4 million, good for 34th on China’s annual box office charts. By comparison, the running Chinese total for Disney’s other film currently in theaters, “Coco,” is $177 million, while “Zootopia” became China’s highest grossing animated release just a few months after “The Force Awakens” came out with $235 million.

Along with these animated films, Chinese moviegoers have also embraced other big live action franchises like Marvel and “Fast & Furious,” so why do they not care as much about “Star Wars”? One major reason is that Chinese audiences didn’t grow up with Luke and Leia the way people in other countries did.

“The first ‘Star Wars’ came a year after the end of the Cultural Revolution in China, and back when the original films came out no foreign films were allowed to be screened in the country,” noted Stanley Rosen, professor at USC’s US-China Institute. “China only began screening foreign films on a revenue-sharing basis in 1994, so interest in ‘Star Wars’ wasn’t passed from generation to generation as it has in the U.S.”

The good news is that with “The Last Jedi,” Disney will have the advantage of marketing to an audience that is now familiar with these characters and also has new characters like Rey and Finn to become attached to. Disney also has its new theme park in Shanghai, which it has used to promote franchises like “Pirates of the Caribbean” and which it used to host the film’s premiere with director Rian Johnson and stars Daisy Ridley and Mark Hamill. Disney also attached trailers for “The Last Jedi” to all local blockbusters during China’s blackout period and will be releasing the film on over 25,000 screens in the country.

There may also be the possibility that the film’s plot strikes a cultural chord with audiences. That’s what happened with  “Coco,” a film that celebrated honoring one’s deceased love ones and ended up resonating in a country where the Qingming festival, a tradition that honors family, is a major date on the calendar. Robert Farley, a commentator for The Diplomat, thinks it’s possible that some in China might find similarities between the plot of “The Last Jedi,” with the Resistance’s struggles against an overwhelming foe, and the founding mythology of the Chinese Communist Party.

But Rosen is skeptical of this. “First, audiences in China are young and don’t really know (or necessarily care) that much about revolutionary myths and even real history,” he said.  “Second, the Chinese leadership would find that a Star Wars reference to their heroic struggle would be a trivialization of the sacrifices made by so many revolutionary martyrs.”

Cultural parallels or not, there are early signs both for and against a strong opening this weekend. On the bright side, ticket presales in China passed those of “Thor: Ragnarok” and “Justice League” earlier this week, films that both grossed just over $100 million. On the other hand, “Star Wars” faces stiff local competition in the form of the romantic comedy “Ex-Files: Return of the Exes,” which has grossed $113 million after just a week in theaters. Then, next weekend, “Jumanji: Welcome to the Jungle” will get its Chinese release.

Either way, “Star Wars: The Last Jedi” is expected to become 2017’s highest grossing release this weekend when it passes the $1.26 billion global total made by “Beauty and the Beast.” But a strong opening in China could help it get closer to the $2 billion made by “The Force Awakens” and possibly put it around to $1.5 billion by the end of its run.