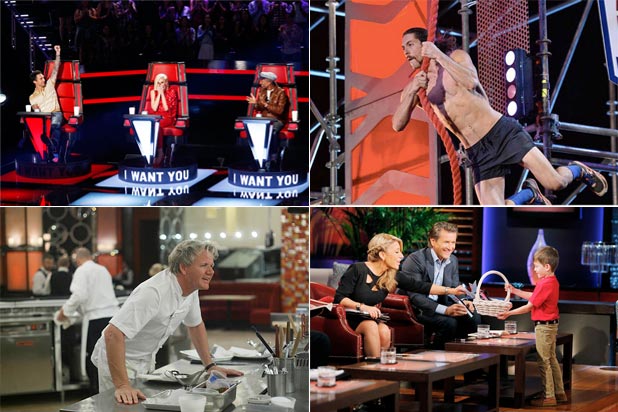 The Big Four broadcast networks premiered nine new shows this week–seven dramas and two comedies. What they did not premiere was a new unscripted series.

In 2014, Fox kicked fall off early with “Utopia,” an ambitious social-experiment reality series that boasted a $50 million price tag and took up three hours a week on the network’s schedule. The show was a ratings bust, and its cancellation was followed by the ouster of unscripted chief Simon Andreae. Unsurprisingly, neither Fox nor any other broadcaster has a new reality show slated for this fall. That absence illustrates not just how competitive the fall season can be, but also the current state of reality television on broadcast — which is not good.

“I don’t know how many times the sitcom or the one-hour drama were pronounced dead,” Rob Mills, senior vice president of alternative programming for ABC, told TheWrap. In unscripted, he added, “We’re in that down cycle of people asking, ‘Gosh, are people tired of these shows? Do they want more reality?'”

Also Read: Retro Superheroes, The Muppets and Bradley Cooper Spin-Off: Why Old Is the New 'New' in Fall TV

That down cycle has been going for a while. Since “The Voice” averaged a 4.8 Nielsen live-plus-same day rating among adults 18-49 during its 2011 debut season, no other new broadcast reality series has rated even half as well. Of the highest rated broadcast nonfiction shows to premiere each of the last three years — Fox’s “Mobbed” in 2012, ABC’s “The Taste” in 2013 and Fox’s “Cosmos” in 2014 — none are still on the air.

On cable, meanwhile, long-running franchises such as VH1’s “Love & Hip Hop,” Bravo’s “The Real Housewives” and E!’s “Keeping Up With the Kardashians” are still launching spinoffs. But even there, the glut of original scripted programming is beginning to squeeze schedule space. As FX CEO noted in August, broadcasters, cable networks and streaming services will premiere more than 400 original scripted series this year.

On Fox, the ascendance of scripted over unscripted was evident last season when “Empire” premiered to higher ratings than its lead-in, “American Idol” — long the engine that drove Fox’s ratings–earned. Now “Idol” prepares to limp into its last season as “Empire” has asserted itself as the highest rated show on broadcast.

“I don’t think broadcast networks have to be that aggressive right now, because scripted has been exploding over the last two years,” Charlie Ebersol, chairman and co-founder of unscripted producer The Company, told TheWrap.

But a lack of new shows in the fall doesn’t necessarily mean that broadcasters aren’t looking to launch new unscripted series. Shows such as ABC’s “Shark Tank,” NBC’s “The Voice,” Fox’s “Hell’s Kitchen” and NBC’s “American Ninja Warrior” all launched at midseason or during the summer.

“The fall schedule is not such a great time to launch a reality show,” Arthur Smith, CEO of A. Smith and Co., which produces “Hell’s Kitchen” and “American Ninja Warrior,” told TheWrap. “Launching shows other times of the year seems to better for unscripted shows.”

At ABC, Mills said that his pipeline is “pretty full right now,” but he’s looking to summer and midseason as the times of year to launch new shows. “Scripted is really having a moment right now, so obviously you stick with what works.” He added, “I do think in fall, you have  much harder row to hoe.”

In terms of when the next major broadcast reality hit will come, he’s optimistic.

“In 2000, we still loved ‘Friends’ and ‘ER’ and ‘Frasier,’ but we were ready for something different,” he said. “That’s going to be happening soon with reality. We’ve just got to be ready with the right show.”