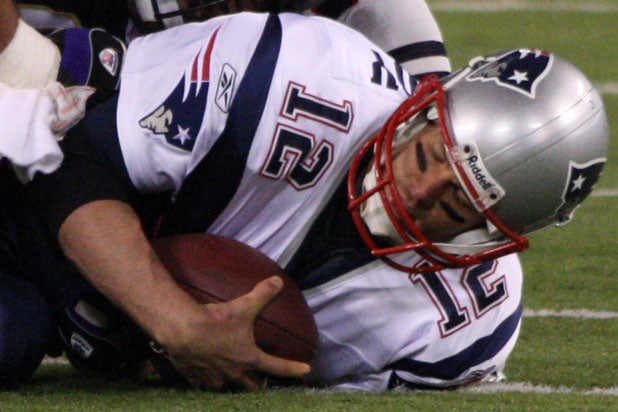 The Denver Broncos’ victory over the New England Patriots on Sunday was a positive outcome for the NFL in at least one regard: Commissioner Roger Goodell will be spared the uneasy prospect of handing Tom Brady another Lombardi trophy.

Sure, the Pro Bowl quarterback has already won four Super Bowls, including the last one during the early stages of the Deflategate drama. But that was before Goodell slapped Brady with a four-game suspension that was eventually overturned in federal court. Goodell hasn’t handed Brady any hardware since he was essentially humiliated by the Patriots quarterback’s legal end-around.

ESPN’s Stephen A. Smith saw the Pats’ loss as a win for the league, and took to Twitter to say so shortly after yesterday’s game:

Happiest person in the world right now? Commissioner Roger Goodell. He no longer has to worry about handing the Lombardi trophy to NE/Brady.

But while many NFL fans and pundits agree with Smith, ESPN sports business reporter Darren Rovell thinks the league stood to benefit either way.

“I honestly don’t think the NFL prefers either,” Rovell told TheWrap of the choice between New England and Denver. “For the conspiracy theorists that say the league doesn’t want the Patriots to win, I actually think it’s good to have that tension whether it’s real or perceived.”

ThePostGame founder and CEO David Katz used to oversee digital for CBS, the network that will broadcast Super Bowl 50 on Feb. 7. He agrees with Rovell, at least from a business perspective.

“I can’t speak to whatever his personal feelings might be about Tom Brady at this point,” Katz told TheWrap. “The Deflategate saga, for all the negativity that may have swirled around the commissioner for the last year, was an absolute boon to interest and ratings around the football league.”

Katz says the controversy surrounding Brady “kept the NFL in the conversation” for the last year, including the “doldrums of the summer,” when other sports are typically in the spotlight.

“Ultimately, what Roger cares about is the quality of the product on the field, ratings and the financial structure behind it,” Katz said. “It was a banner year for the NFL.”

We’ll probably never find out how Goodell truly feels, but it’s a sure bet the league will eagerly embrace the feel-good story of Peyton Manning’s return to the Super Bowl in the twilight of his career.

“Between Tom Brady and Peyton Manning, you could not lose in terms of the storyline there. Either you had the Patriots coming back from the allegations of cheating, with the assumption that they did it clean this year, or you have Manning with a chance to win the Super Bowl in his final game,” Katz said. “Sports fans love heroes and villains.”

The NFL has scheduled an appeal of the Deflategate case for March, which could potentially take Brady off the field for the first four games of next season.

As for the Patriots’ QB, he might not even watch the Super Bowl now that he won’t be a participant. “I’m not sure,” Brady said in yesterday’s post game press conference when asked if he’ll tune in to watch the Broncos represent the AFC.