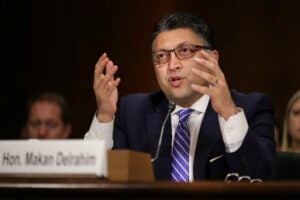 Is the Writers Guild of America’s Standoff With Agencies Starting to Thaw?

Smaller agencies and the Writers Guild are becoming more flexible, but the biggest sticking point will still be settled in the courtroom

Has the logjam between the Writers Guild of America and Hollywood agencies finally been broken?

While two smaller agencies, Abrams and Rothman Brecher Ehrich Livingston (RBEL), have signed the Writers Guild of America’s Code of Conduct in the last two weeks, the months-long standoff between the guild and agencies shows little sign of real progress — especially with the top four agencies who had represented roughly 90% of guild members.

Since the WGA West membership overwhelmingly backed the re-election of President David A. Goodman in September, the guild has continued its summer strategy of talking to individual agencies to sign the Code of Conduct it adopted in April requiring agencies representing guild writers to eliminate packaging fees — payments made by a studio to agencies in exchange for packaging talent for a project. The move, and agencies’ refusal to sign on, prompted more than 7,000 guild members to terminate their representation with their agencies, the vast majority of whom refused to sign on to the new guild rules.

But the guild managed to draw in both Abrams and RBEL this month thanks to a shift in approach, replacing the Code of Conduct with a franchise agreement that shows more flexibility on certain issues. Back in July, talks between Abrams and the guild fell apart in part because the two sides could not agree on how agencies shared contract information with the guilds.

The new Abrams and RBEL franchise agreements emphasize tighter restrictions on who within the WGA will be able to access contract data to insure accountability. Abrams CEO Adam Bold said that the guild agreed to set up “heightened security protocols, and limit access to staff within the guild who have a valid business reason to have access to the information.” The WGA, for its part, has said in letters to its members that it is working with franchise agreement signees to “systematize sharing of contracts…tailored to the agency’s capacity and systems.”

The agreement also allows agencies to keep up to a 5% ownership share in a production or distribution outlet, giving agencies a chance to make some profits from production while “protecting writers from the egregious conflicts of agency-owned production companies,” a charge that WGA has leveled against mega-agencies like CAA.

But beyond specifics, these deals are also coming simply because agencies want to get their literary teams back to work. Bold acknowledged that the WGA election results in September showed that the vast majority of writers are steadfast in opposing packaging fees. While the Association of Talent Agencies (ATA) insists on protecting the practice, smaller agencies that don’t use packaging fees as much have less incentive to continue holding out.

“We feel that it is time to put the writers back to work, as well as our agents,” Bold wrote.

It’s unclear whether other smaller agencies will also sign on with the guild with its more flexible stance on its Code of Conduct. The WGA declined to comment for this story, including on its potential negotiations with other agencies.

But even if more agencies agree to phase out packaging fees, most observers expect that the fate of that lucrative revenue stream and the overall standoff between the guild and agencies will be settled in the courtroom, not at the negotiating table.

William Morris Endeavor, Creative Artists Agency, United Talent Agency, and ICM Partners still remain as the four agencies that both sport the largest literary departments in Hollywood and make the vast majority of deals involving packaging fees. Both they and the ATA have refused to eliminate such practices, so it will be up do a federal judge to determine whether the WGA is correct in describing packaging fees as an illegal payment from an employer to a representative of an employee that violates federal labor laws.

That means that the packaging fee battle will extend into 2020, as hearings for both the WGA’s lawsuit and the agencies’ consolidated suit won’t be heard until next year. The WGA is charging WME, CAA and UTA with violating federal antitrust and RICO laws by creating a system of kickback payments and price-fixing. They also accuse the top agencies of making a “collusive agreement not to negotiate individually with the Guilds” and “to blacklist writers or other individuals or entities who object to packaging fees or agree to the Guild’s Code of Conduct.”

The agencies, meanwhile, have accused the WGA of participating in an “unlawful boycott” by having over 7,000 of its members terminate their representation with agencies who did not sign the Code of Conduct when it was enforced back in April. Approximately 90% of WGA members were represented by the top four agencies in Hollywood.

The next date for the two sides in court is on December 6, when a dismissal hearing for the agency lawsuit will be held. The hearing for that lawsuit is set for January 17.