Isabelle Huppert’s role in “Elle,” France’s official entry for the 2017 Academy Awards, let her try on a range of emotional disguises for a woman whose rape at the hands of an unknown assailant is the catalyst for a bold psychological study. But the veteran French actress, who’s made films with directors from Chabrol to Cimino, found working with Dutch auteur Paul Verhoeven a welcome extension of her own versatility.

“It’s surreal. I think it’s very, very close to the reality of a human being, in a way,” she told an audience on Monday at TheWrap Screening Series in West Los Angeles. “The whole investigation of her psyche, the whole investigation of any relationships in the film, is so true. I think there’s a great amount of truthfulness. That’s what is so disturbing: the ambiguity of it, the complexity of someone who does what she does.”

In the film, which is Verhoeven’s first feature since “Black Book” (2006), Huppert portrays Michèle, the hard-charging director of a leading video game company based in Paris. After being sexually attacked in her home, she begins the process of tracking down the rapist — a search that yields surprising results and reveals her capacity to be both victim and victimizer in the real world.

“Challenging? No, I don’t think so,” Huppert said of her role in a conversation with TheWrap founder and editor-in-chief Sharon Waxman. “Maybe it’s more challenging to watch it than to [act] it. I’m not trying to diminish what I was doing, but it was easy actually. It was a great experience to do the movie with him. Paul Verhoeven has this ability to do several different kinds of movies, from the Hitchcock thriller to a psychological thriller of a woman to a comedy … for all those reasons, I was really happy he did this film.”

Even before the rape, Huppert’s character has a too-intimate relationship with violence. The video games her company produces are shot through with ritual mayhem, and her character conceals a horrific past: she’s haunted by a father convicted as a serial killer 40 years earlier. As such, Huppert said, Michèle embraces the ambiguous, disturbing aspects of the human psyche.

“From the very beginning, when the book was published, the author Philippe Dijan, kept insisting that it could be taken as a fairy tale, a dark fairy tale, something completely imaginary,” Huppert said.

It was that creative ambiguity that appealed to her. “Verhoeven leaves big holes,” she said. “He just throws things that might be the beginning of an explanation, and in between you have all those gaps everybody is likely to fill up and do their own interpretations. Everything’s left as a question mark.” 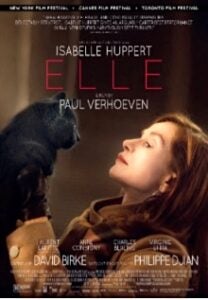 “It’s almost as if everything around her is artificial, including the rape. She lives in a virtual world. Almost everything that happens to her there is an artificiality. It’s almost like a denial of reality,” the actress added.

Working with Verhoeven itself was an intuitive experience, she revealed. “We never talked about the character, we just did it,” she said. “We never had any discussion, we were completely in tune. I don’t think it’s something you can discuss before starting a movie like this. We just let the story go.”

You’d expect the film’s edgy themes — rape, violence, a woman’s efforts to come to grips with a brutal past — might be met with controversy. So far, not so much. “I don’t think that’s what the movie projects and so far people seem to get where it is,” Huppert explained. “It’s a disturbing film, and I understand that a film is made to shake people’s minds. But I don’t think people should see it for what it’s not.”

In fact, Huppert said shooting the film’s multiple rape scenes was just part of the job as a working actress: “It was violent and intense, but It wasn’t the first rape scene I’ve ever done. It’s four scenes, and it’s all shot in small pieces. It was not so scary, actually. Do you expect me to tell you I was in tears? I did a rape scene in ‘Heaven’s Gate’ that was a lot more scary,” she said, referring to the ill-fated 1980 western directed by Oscar winner Michael Cimino, who died in July.

When it comes to Cimino, Huppert recalls him fondly. “Personally, I think he was one of the major American directors. He was completely inspired, and in a way he never really [recovered] from the failure of the film, from the non-acceptance of the film. That was something he never came to terms with. It was unique because Michael was unique. He was a huge talent,” she said.

What’s next? She’s just finished “Happy End” with director Michael Haneke. Jean-Louis Trintignant and Mathieu Kassovitz also star in the drama about a French family caught up in the European refugee crisis. And Huppert recently completed work as the title character in ‘Madame Hyde,” a gender-tweaking takeoff on the Robert Louis Stevenson story, directed by Serge Bozon. Gerard Depardieu and Romain Duris will also star.