If you don’t know anyone in Brussels, lucky you. The Isis attacks that killed dozens remain a distant threat in a not-so-popular European capital.

It so happens that I know a few people in Brussels, and have been there many times.

The attacks on Tuesday felt closer than the 5,500 miles that separate the continent from California.

The caliphate isn’t coming, but the persistent violence perpetrated by primitives who yearn for the Middle Ages most certainly will continue.

Amaq News, the “official” news agency for ISIS, put out a couple of statements on Tuesday justifying the cold-blooded murder of 31 innocents and the maiming of 200 more.

Apparently they were piqued at being criticized on social media by Muslim peers:

“Justifying the Paris attacks/Brussels attack(& the likes of it) in the light of the Qur’ān and sunnah and the ijmā’ & quotes from the scholars of the salaf,” went one statement. “We have seen so many people in the social media claiming that The Islamic state was not justified in killing the French “innocent” citizens in the blessed ghazwa in Paris, and that of the Brussels attack now.We have also seen some evil “scholars” – Scholars for the dollars quoting the textual evidences out of context.” 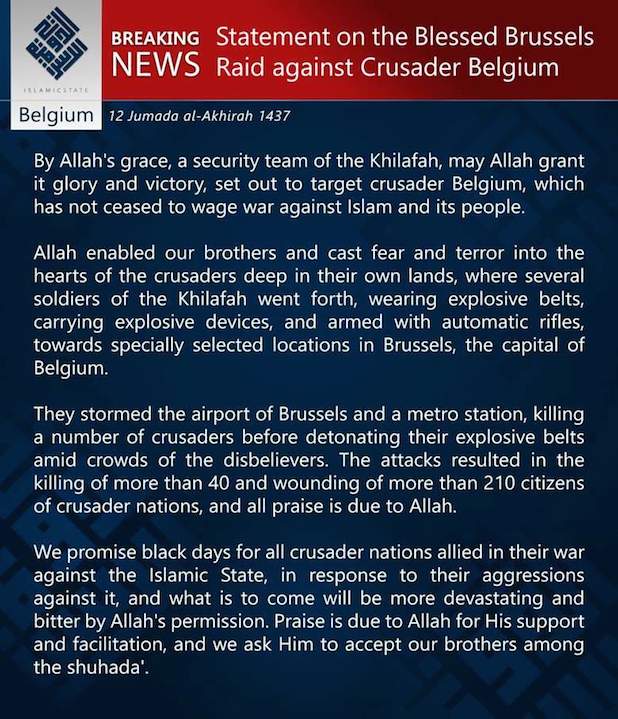 The statement then set things straight, justifying their action via numerous passages in the Koran. One wonders why they bother. As we have seen in numerous accounts from young women who escaped ISIS, former sex slaves of the Islamic State, their interpretation of the Koran is dictated by the law of the street. Rape or any other desired treatment of a non-Muslim woman is permissible. (Not that the treatment of Muslim women is anything to write home about.)

And in this case the Koran permits any Muslim to kill any non-believer, man, woman or child.

“So, this was a piece of article for the one who cry and mourn on the death of the Kuffar, while the death hundreds of muslim men, women, old and children dying daily in the airstrikes don’t effect them in anyway,” said ISIS.

If ISIS can’t have what they want – and, no, they can’t have a caliphate in 21st century Europe, sorry – they will continue to terrorize and spread misery instead.

Weep for Brussels, but not for long. There must be no tolerance for such intolerance.