An Israeli airstrike on Saturday completely destroyed a 12-story building in Gaza City that housed the Qatar-owned TV news network Al-Jazeera, the Associated Press and other media outlets.

The strike came roughly an hour after the military ordered the building’s evacuation, according to the AP — and reflected a new escalation in violence as Israel mounted its sixth straight day of bombings in the Gaza Strip.

The attack also came one day after the Israeli military issued a false report of a ground invasion of the Gaza Strip to numerous foreign journalists, including the New York Times, The Washington Post and Agence France-Presse — which several Israeli media outlets reported was a deliberate effort to deceive Hamas fighters who have fired hundreds of rockets into Israel since Monday. 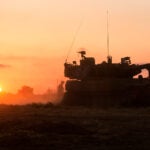 According to the AP, no explanation has been provided for why the media office building was targeted. Video footage captured the strike that razed the structure in a huge cloud of dust.

“I have been working here for 11 years. I have been covering many events from this building, we have lived personal professional experiences now everything, in two seconds, just vanished,” Al-Jazeera correspondent Safwat al-Kahlout said. “All my colleagues, despite the sadness, they didn’t stop a second — they were looking for an alternative just to keep Al-Jazeera on top of the news.”