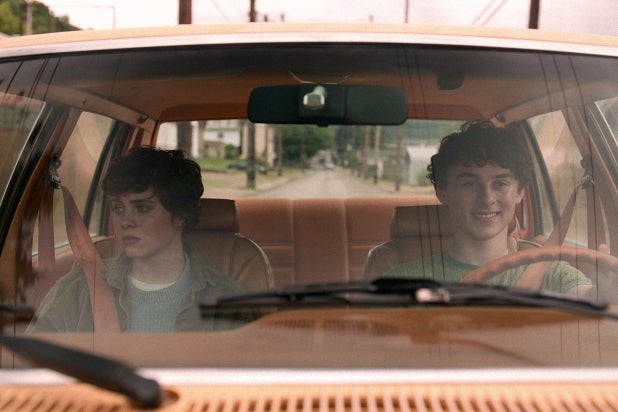 Sophia Lillis, Wyatt Oleff in "I Am Not Okay With This," Courtesy of Netflix

Netflix’s latest coming of age series, “I Am Not Okay With This,” finds Sophia Lillis and Wyatt Oleff reuniting for the first time since their breakout roles as Beverly Marsh and Stanley Uris in Stephen King’s “It” film franchise.

Is it just us, or does the quaint, run-down mill town where “I Am Not Okay With This” is set look a lot like Derry, the fictional Maine town where “It” takes place?

In a recent interview with TheWrap, the young actors said it wasn’t on their minds while filming, but in retrospect, there are a lot of aesthetic similarities between the young adult series and the clown-themed horror film franchise.

“There’s a scene, I think it’s in the trailer, but it’s like my first scene in the show — we’re walking, and there’s this giant train track above all the houses, which is beautiful, and it kind of reminds me of that one scene in ‘It’ where we’re all walking in the grass and the train is passing by,” Oleff told TheWrap.

“Brownsville, the place where we were staying, kind of had that style to it,” Lillis added. “Especially in certain areas in Toronto where we shot more suburban elements. Yeah, I could see the connection to it.”

In the 7-episode series, which is based on the comic book by Charles Forman and co-created by Jonathan Entwistle of “The End of the F—ing World” and Christy Hall, Lillis plays Sydney, a teenage girl who is coming to terms with the loss of her father, finding acne in strange places, figuring out her sexuality, and the fact that she has superpowers.

Also Read: Why Netflix's New Top 10 Lists Are More About Marketing Than Transparency

As for Oleff, he once again plays a boy named Stanley — but this one is weird, well dressed, and has a big ol’ crush on Sydney.

“I didn’t go in expecting anything similar to ‘It’ — [‘I Am Not Okay With This] is a very different story,” Oleff said. “But some of the aesthetics are very similar.”

But the vintage look and soundtrack weren’t the only things “I Am Not Okay With This” and “It” had in common.

Lillis’ role as Sydney required her to shoot a few scenes in an outdated, tiled bathroom similar to the one in the apartment Beverly Marsh and her father share in “It: Chapter 1” — you know, where that scene takes place in which Beverly hears the voices of dead children calling to her from inside her sink drain. “It” fans will also remember Beverly getting sprayed by a gushing geyser of blood, which is not dissimilar from the scene in  “I Am Not Okay With This” in which Sydney walks down the street covered in blood

The bathroom setting is something Lillis says has become oddly familiar to her throughout her career.

“I have a lot of scenes in either bathroom stalls or bathrooms in general. I feel like I’ve noticed that,” she said. “The whole, ‘It’ scene [that involved] throwing water on me, and me in the bathroom when the stall’s shaking and everything.”

“I Am Not Okay With This” is now streaming on Netflix.

In honor of the upcoming 40th season of the beloved reality series, which premiered in 2000, here are some of the most shocking moments of the last 20 years of "Survivor" -- from full-frontal nudity on national television to Dan Spilo getting kicked off the show last season. Season 40 premieres Feb. 12 at 8/7c on CBS.