"Me and Orson Welles" was "a difficult movie to get made in the current environment," director Richard Linklater admitted Tuesday night at TheWrap’s screening/Q&A at the ArcLight Sherman Oaks. 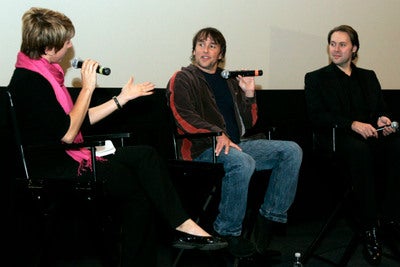 Linklater (center, with TheWrap’s Editor-in-Chief Sharon Waxman and actor Christian McKay) said the movie came about when he fell in love with Robert Kaplow’s book and optioned it.

He went to his usual funding sources, but "our industry today has changed so much, it was clear they wouldn’t finance this," even with "High School Musical’s" Zac Efron attached. "The five guys who know everything said his audience won’t go see this movie."

"In the ’90s, this probably would have been a studio film," he added. "It doesn’t fit the business plan anymore."

So they took the project to Europe, landing funding and period locations in the Isle of Man and executing a 36-day shoot. "We kind of felt it was our own destiny," like Welles’, Linklater said, "not to be embraced at home."

Asked how he found co-star Christian McKay, who makes his film debut as Welles in the movie, Linklater deferred to his actor to tell the tale.

The British thesp said, "I was doing a one-man show about Orson Welles in New York, so far Off Broadway that it was Canada."

Linklater added, "It was a stage show — he had a fat suit, lots of noses. He was playing the older Welles."

McKay credited both "diabolical and divine luck" for his getting the part. "I had always read about being in the right place at the right time but thought it would never happen to me."

But a friend of Kaplow’s waited for McKay at the stage door one night to tell him about the film. "He told me a lie to get me interested," McKay said, "that Leonardo DiCaprio had just turned it down.

"And I said, oh yes, naturally, they’ll come to me next," the stage veteran said with characteristic dry British wit.

"Not even in my wildest imagination did I think Richard could cast an unknown," McKay added.

But, as Linklater pointed out, "The magic of an unknown in this role is you can suspend disbelief." 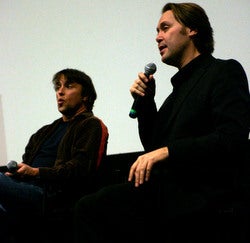 Of course, with Efron, Linklater had anything but an unknown. The Disney hearthrob plays a teenager who gets caught up in the magic of the theater when he lands a small role in Welles’ landmark 1937 "Caesar" at his Mercury Theater. (Efron’s character is based on a real person, Arthur Anderson, who was 15 at the time; he still lives in New York City, Linklater said.)

"It’s interesting, Zac’s presence in the picture," Linklater mused. "He’s a leading man. I think he’s a gifted performer. He can go toe-to-toe with one of the biggest of the personalities of the 20th century.

"Never underestimate him — Orson does in the movie," he added.

Of the screaming hordes who were always awaiting Efron around the set and locations, McKay quipped, "I kept telling [Linklater] they were ‘Citizen Kane’ fans."

"People call it a coming-of-age movie," Linklater said. "They think it’s all Zac, but it’s Orson Welles’ coming of age, too. Orson is 22 here, figuring out who he is."

It was an amazing year for Welles: Launching the Mercury Theater with "Caesar" in November 1937, appearing on the cover of Time magazine the following May, and in October creating his infamous "War of the Worlds" radio broadcast.

Linklater said they made the staging of "Caesar" as historically accurate as they could, working from photographs, including a photo spread by Cecil Beaton, and contemporary descriptions.

"We filmed a lot of the play," he said. "I think about half of it is still there. It was great for the cast to rehearse and shoot it, for their characters, but we didn’t need as much as I thought we might in the film.

"The actors all wanted to know, ‘Am I a good actor?’" in the film, Linklater said. "I said, ‘Oh yeah — the actor you’re playing is better than you!

"My theater friends said, ‘Thanks for not making us look too bad,’" he added.

In the film, Linklater said, "You can see the genius of Orson, but you also can see the seeds of destruction that will cause him problems later in his career. He was just too big — he couldn’t sublimate himself to Hollywood.

"The freedom and success he had, there’s nothing that can compare to that today."