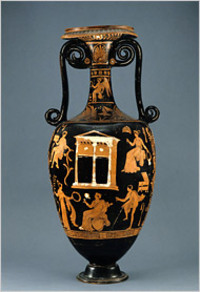 More booty going back home:  Princeton's art museum has agreed to transfer title to eight ancient artifacts to Italy in the wake of demands by the government, my colleague Elisabetta Povoledo and others reported over the weekend. Of 15 items under dispute, Princeton will keep 7 objects and transfer legal title to eight, and four of those they can keep on loan for four years. The stunning vase pictured at left will stay on loan to Princeton. No details about what evidence or documents were used to strike the deal, but I would imagine that this is the start of a flood of similar agreements, as institutions make rational decisions in the wake of the Getty deal and the prosecution of Marion True. Italian prosecutor Maurizio Fiorilli told reporters that he is looking at artifacts at the Glyptotek in Copenhagen, the Cleveland Museum of Art and the Miho Museum in Shiga, Japan. As these deals continue to roll in, and Italy takes possession of beautiful, well-curated and well visited artifacts from around the world, two points need to be monitored by observers: how well will Italy care for the objects that it has claimed as restitution? And has the campaign to take these pieces back to Italy had a real impact on illegal excavating?