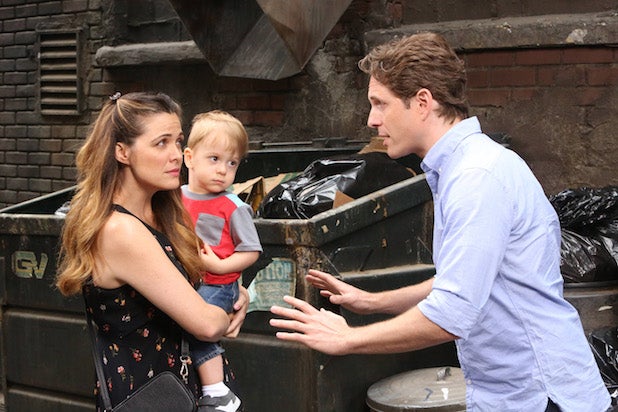 Everyone at Paddy’s raise a glass, because Dennis Reynolds is coming back!

Well, Glenn Howerton is going to return, along with the rest of the cast of “It’s Always Sunny in Philadelphia,” when the series launches its 13th season this September on FXX. So Dennis is coming back — but he’s not coming back. Allow us to explain.

At the end of Season 12, the most selfish member of the self-centered crew decided he was leaving the gang and moving out of the City of Brotherly Love to be closer to his estranged son in North Dakota. And, thanks to a crazy-long hiatus (Season 12 ended in March 2017) and extreme evasiveness from Howerton and company, fans have been wondering if and when (and how) Dennis was going to be included when the show returned for its upcoming 13th year.

Well, when FXX revealed the “Always Sunny” season premiere date Thursday, it also dropped a synopsis that teases where we’ll find Dennis come the premiere. Looks like he was really serious about that whole North Dakota thing.

The news of “Always Sunny”s returned also included the omission of Howerton’s name from the list of the show’s executive producers. FX had no comment when asked by TheWrap about Howerton’s lack of an EP credit on Season 13, allowing their release to speak for itself. Representatives for Howerton did not immediately respond to a request for comment.

Here is the official description for the upcoming installment of the FXX series:

The Gang Returns… mostly…. in the 13th season of the FXX original comedy series “It’s Always Sunny In Philadelphia.” Mac (Rob McElhenney), Charlie (Charlie Day), Dee (Kaitlin Olson) and Frank (Danny DeVito) return to their duplicitous, scheming ways at Paddy’s Pub, while Dennis (Glenn Howerton) takes on the new role of father in North Dakota. Last season, the Gang experienced new highs – Mac acknowledged his sexuality and Charlie convinced The Waitress, his longtime target of affection, to move in with him – and the lowest of lows – Frank became the official beverage sponsor of a terrorist group, Dee helped a man reach rock bottom, and Dennis was investigated for murder. Even without Dennis Reynolds, the Gang has its hands full as Charlie hopes to have a child with The Waitress, Mac sets out to understand his newfound sexuality, Dee takes feminism to new heights, and Frank goes to great lengths for the Gang to experience the greatest moment in Philadelphia sports history – an Eagles Super Bowl victory.

“It’s Always Sunny in Philadelphia” was created by McElhenney. He executive produces, along with Day, Michael Rotenberg, Nick Frenkel, Tom Lofaro, David Hornsby, and Megan Ganz. The show is produced by FX Productions.