After six years of legal maneuvering, “Who Wants to Be a Millionaire” creator Celador International gets its day in court with a $270 million lawsuit against Disney, which the production company claims hid millions in profits within a complex accounting scheme.
The trial, beginning Tuesday in Riverside, Calif., will be a rare look at the byzantine webs that Hollywood dealmakers can weave. If it goes Celador’s way, the evidence could break the levee of Hollywood accounting methods.
Celador brought “Millionaire,” which originally aired to great success in the U.K. in 1998, to the United States the following year. It now alleges that Walt Disney/ABC, Buena Vista Television and Valleycrest Productions bilked Celador of millions in profits with overly complicated accounting arrangements and deflated payments.
Certainly the witness list, which was first unearthed by the Hollywood Reporter, reads like an exclusive Disney off-site retreat circa 2000 with an entourage of a few dealmakers thrown in for good entertainment value.
While former “Millionaire” host Regis Philbin is not scheduled to be making an appearance before Judge Virginia Phillips, almost everyone else involved with the show is. 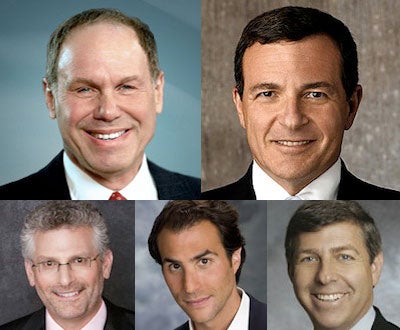 Among those potentially taking the stand in federal district court are former Disney CEO Michael Eisner, current Disney president-CEO Bob Iger and former ABC TV studio boss Mark Pedowitz. Former NBC Universal co-chair Ben Silverman and Greg Lipstone, who when they were at William Morris were instrumental in orchestrating the deal that brought "Millionaire" Stateside, also have been called (all the above pictured at left.)
Celador’s trial attorneys, Roman Silberfeld and Marcia Harris, did not respond to TheWrap’s request for comment on the case, filed in May 2004. The office of Marty Katz at Sheppard Mullin Richter & Hampton LLP said the Disney lead lawyer was preparing for the trial and had no comment.
Touted as ABC’s ratings savior at the time, “Millionaire” debuted in the U.S. on Aug. 16, 1999. Within a year, the Philbin-hosted game show had put ABC in the top spot and, at one point, was airing up to five nights a week. But by late 2001, the bloom was off the bucks, and “Millionaire” began to slide. The last primetime version aired June 27, 2002, but the show, with Meredith Vieira as the host, went into syndication starting on Sept. 16, 2002.
Under its deal with Disney, Celador, which licenses the show in more than 100 countries, receives an executive producer fee for each episode – which became a weekly fee when the show went into syndication – and back-end profits derived from Buena Vista Television.
However, the money from Disney-owned Buena Vista was calculated after production costs and other expenses. Celador claims Disney deflated what ABC should have paid Buena Vista, thus cutting directly into Celador’s take.
Additionally, Celador says, Buena Vista’s and Valleycrest’s production costs and deductions were so unexpectedly high that the big back-end Celador anticipated actually ended up in the red.
Disney contends that it in no way violated the original deal with Celador and that Celador, which also co-produced the Oscar-winning film “Slumdog Millionaire” (which featured the game show as a key plot point) and now is owned by Sony Pictures, made millions of dollars from the agreed-upon per-episode fees.
Celador, which has reached out-of-court settlements with several copyright claimants, also alleges that with ABC and Buena Vista keeping the show on the air even as the ratings went into freefall, Disney deliberately prevented the production company from profiting from syndication.
Disney, and obviously ABC and Buena Vista TV, dismiss that as irrelevant to the actual suit now before Judge Phillips.
Regardless, unless someone phones a friend and a settlement is reached quickly, the trial is scheduled to last three weeks.
x