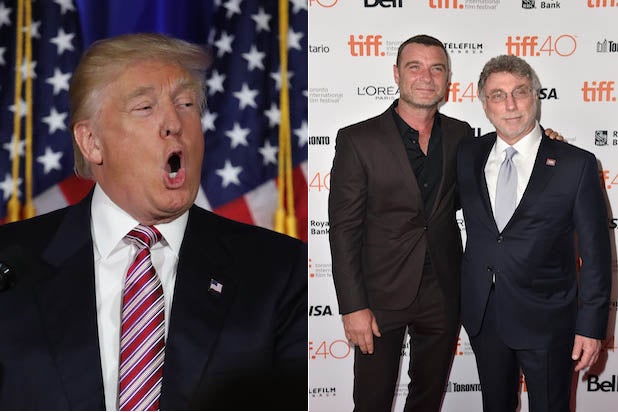 Presidential candidate Donald Trump’s latest fight pits him against one of the real-life journalistic heroes portrayed in “Spotlight”: Washington Post executive editor Marty Baron was played by Liev Schreiber in the Oscar winner for Best Picture.

Baron led the Boston Globe’s investigation into widespread cases of child molestation in the Roman Catholic Church, which won the paper a Pulitzer Prize. On Monday, Trump pulled the Post’s media credential for what he called “incredibly inaccurate coverage.” Calling the Washington Post “phony” and “dishonest,” Trump called out an article the paper had recently published, “Donald Trump seems to connect President Obama to Orlando shooting” in an earlier Facebook post.

In a statement published on Twitter, Baron defended the Post’s coverage of the GOP presumptive nominee and said the paper would continue to cover Trump, even without press credentials.

“Donald Trump’s decision to revoke The Washington Post’s press credentials is nothing less than a repudiation of the role of a free and independent press,” Baron said. “When coverage doesn’t correspond to what the candidate wants it to be, then a news organization is banished. The Post will continue to cover Donald Trump as it has all along — honorably, honestly, accurately, energetically, and unflinchingly. We’re proud of our coverage, and we’re going to keep at it.”

Originally from Florida, Baron started his career as a reporter at the Miami Herald. He went on to become the assistant managing editor of the Los Angeles Times in 1991 before moving to the New York Times, where he became the associate managing editor in 1997. He returned to the Miami Herald in 2001 to become the executive editor for a year and then moved again to serve as the editor of the Boston Globe for 11 years. In 2013, Baron took over as executive editor of the Washington Post and has led the Post to win four more Pulitzer Prizes since then.