"Tori & Dean: Home Sweet Hollywood" returns for its fifth season on Monday, April 5, and Oxygen plans an entire week of promos to mark the occasion.

It all starts Monday, March 29, with an all-day marathon of "Tori & Dean," starting at 8 a.m. But it’s not just any marathon. It’s "a multi-platform countdown," according to Oxygen. 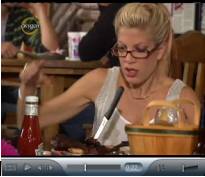 Episodes during Monday’s marathon "will include on-air tweets from Tori Spelling, Dean McDermott, best friend Mehran, the Guncles and their superfans. The tweets, featured in on-air snipes, provide new perspectives from the series stars and fans on seasons past," Oxygen says.

Meanwhile, on Oxygen.com, each day will bring new and exclusive content, including candid interviews with the stars, family photos and virtual gifts to fans.

Oxygen also will repeat its all-day marathon of “Tori & Dean: Home Sweet Hollywood’s” seasons three and four on April 5 from 7a.m.-10 p.m., leading into the premiere of season five at 10 p.m. ET/PT.

The new season’s highlights include the first Spelling-McDermott cross-country family road trip, which includes stops at an ostrich farm and a 72-ounce-steak family challenge.

Tori Spelling and Dean McDermott created the series and executive produce it with Fenton Bailey and Randy Barbato of World of Wonder Productions. Richard Courtney and Robert Sizemore are co-executive producers.