Even widespread lockdowns couldn’t get young people to watch more live TV, with new data from Hub Entertainment Research on Wednesday showing only 14% of Americans ages 18-34 pick live TV as their first option when they sit down to watch something.

That’s down 7% from the same time last year — back when millions of people hadn’t been compelled to sit on their couch all day due to the coronavirus pandemic. And perhaps even scarier for cable and satellite providers is that even their biggest fans — Americans 55 and older — are losing interest in live TV, too; 46% of U.S. viewers 55 and older pick live TV over subscription streaming and other options, down from 53% in 2019. 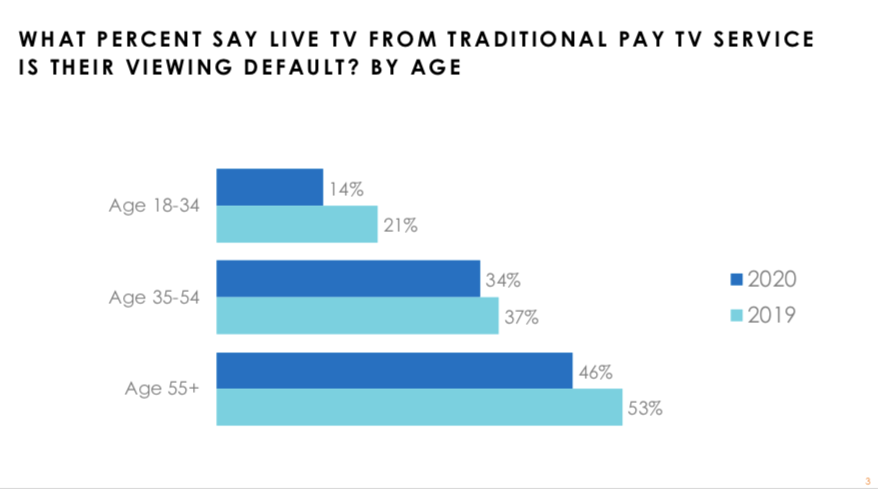 For most respondents, it usually boiled down to convenience and quality. The two most common answers people gave for clicking their first option were “favorites” — they could find their top shows — and “easy” — meaning it was a breeze to find something to watch.

Overall, exactly half of all respondents said their first stop for TV viewing was a subscription streaming service, up from 47% last year (building off a recent report from TheWrap showing one in four consumers have subscribed to at least one new streaming service during the pandemic.) Netflix is the top pick when it comes to streaming services, with 23% of those respondents saying it’s their first option. The streaming heavyweight reported last month it had added another 10.1 million subscribers during Q2, bringing it to about 193 million globally.

“We’ve seen a significant boost in streaming TV service subscriptions since the start of the pandemic in March of this year,” Hub principal analyst Peter Fondulas said in a statement. “But perhaps more significant than the simple increase in online subscriptions is the profound shift in consumers’ viewing behaviors generally. Instead of reaching first for the cable remote when it comes time to watch TV, more and more consumers are defining TV viewing, first and foremost, as viewing on streaming services. Whether that shift persists once the pandemic crisis has passed is, of course, the billion-dollar question.”

Hub’s report, which included 1,600 respondents between the ages of 16 and 74, highlighted how fast the shift towards streaming has been; in 2016, live TV was three times as likely as Netflix to be the first viewing option. In 2020, that gap has been nearly completely erased.