Her death was first reported by ABC News and confirmed by Trump himself on his own Truth Social platform. No cause of death was given, but ABC said police responded to a call about a person in cardiac arrest Thursday afternoon on the Upper West Side and do not suspect foul play.

“I am very saddened to inform all of those that loved her, of which there are many, that Ivana Trump has passed away at her home in New York City,” he wrote. “She was a wonderful, beautiful, and amazing woman, who led a great and inspirational life. Her pride and joy were her three children, Donald Jr., Ivanka, and Eric. She was so proud of them, as we were all so proud of her. Rest In Peace, Ivana!” 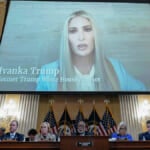 Ivana married Donald Trump in 1977, and the two had three children: Don Jr., Eric, and Ivanka. During their marriage she held key management positions in various Trump Organization businesses. They divorced in1992, after which she became a fashion designer and TV personality on QVC and Home Shopping Network.

The split was a major tabloid and news story, as Donald Trump’s affair with Marla Maples was brought to light (Maples and Trump later married in 1993 and have one daughter, Tiffany). Ivana won a reported $14 million settlement that included a mansion, an apartment in Trump Tower and regular use of Mar-a-Lago.

Ivana at first alleged physical and sexual abuse in her divorce deposition, but agreed not to speak about their marriage as part of the settlement agreement. She married her fourth and final husband, actor and model Rossano Rubicondi, in 2008 at a ceremony hosted by Donald Trump at Mar-a-Lago.

Ivana Trump was also a prolific writer, penning an advice column or the Globe for 15 years and publishing several books, both fiction and nonfiction.