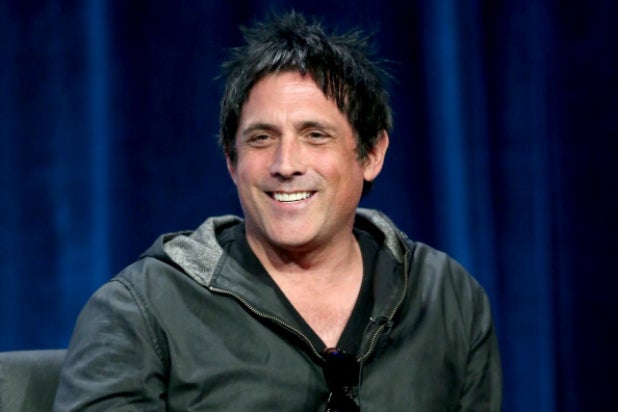 J.H. Wyman is super psyched about his upcoming Fox thriller, “Almost Human,” and he really, really loves talking science fiction, so much so he even needs to be reeled in a bit. It’s no easy task for a publicist listening on the line, but it is thoroughly enjoyable for a journalist.

The upcoming action-adventure follows Detective John Kennex (Karl Urban), a cop who survived one of the most catastrophic attacks ever made against the police department. After waking up from a 17-month coma, Kennex can’t remember much — except that his partner was killed, he lost one of his legs and he is now outfitted with a highly-sophisticated synthetic appendage. To make matters more dramatic, by mandate, all cops must partner with a robot (Michael Ealy). And the depressed, PTSD-riddled Kennex hates robots.

Here are the 10 things Wyman told TheWrap that you should know about the series before the premiere:

Which means that due to the time slot, “Almost Human” is far more family-friendly than Wyman’s other show. The lack of darkness in the new one is intentional, not unfortunate, he says: “We wanted something that would be really fun, have a mythology but still have great cases every week — to have a cop show where you could check out what’s going on in the future.”

2. But “Almost” has many elements of “Fringe”
There is certainly Wyman’s stamp of science-fantasy (and science-fact and possibility) in the futuristic buddy-cop procedural.

He is also adopting a very important lesson in patience that he says he learned from “Fringe”: “Not everything that turns out fantastic started that way.”

3. Wyman really believes in all the sci-fi mumbo jumbo he puts on screen
Wyman says things are going to change big time soon. He walked TheWrap through a scenario where patients go to the doctor, find out they have Stage IV lung cancer, are given a unique personalized silver pill the size of a marble filled with hundreds of millions of cancer-destroying microscopic computers. “By dinner, you won’t have cancer,” he said.

Also read: 17 of the Best in November Sweeps TV: Rhyming, Crossovers and Something ‘Breaking Bad’

4. He wants me (you) to read “The Singularity Is Near” by Ray Kurzweil
“I’m really interested in the way that group thinks,” he said. “[It’s] really clever, cool — and I think its possible.”

Here is the book’s official synopsis: The Singularity is an era in which our intelligence will become increasingly nonbiological and trillions of times more powerful than it is today — the dawning of a new civilization that will enable us to transcend our biological limitations and amplify our creativity.

Sounds interesting, even if we have no idea what that means.

5. Wyman chose the year 2048 for “Almost Human” kind of because he had to
Wyman originally didn’t want to peg a specific year to the show, but he recognized that it would provide context to his vision.

“We basically just wanted something not too far in the future,” Wyman said. “We didn’t want flying cars. The year, to me, is really not important.”

6. Wyman reads what you write on the message boards
“In production I listen to the fans,” Wyman told TheWrap. “I really like to enjoy a relationship with them. I sincerely hold them responsible for ‘Fringe’ being picked up. It’s astounding the success that we had because of everybody’s push on the show.”

7. But that doesn’t mean Wyman reacts to the fanboys
“By the time everybody’s watching an episode, we’re already seven episodes later,” he told TheWrap.

8. Yes, the showrunner in the process of merging his two Twitter handles
Wyman’s long-running twitter handle is the very committed @JWFRINGE. But he’s changing that.

“Yeah I actually have @JHWyman now, I think,” Wyman said. “I’ve been locked out, I got a new phone — it’s a long story. I’ve got a lot of fans on the @JWfringe that hopefully will come out.”

He added, “I don’t sleep, this guy really doesn’t sleep.”

10. Minka Kelly is pretty much perfect … to have on set
“She’s just as cool as she is good-looking. [You think], ‘Wow, there’s gotta be something [wrong with her],’ but there isn’t. She’s really super sweet and really talented.”