Academy Award winner J.K. Simmons, who plays William Frawley in “Being the Ricardos,” faced challenges researching Frawley since he died back in 1966. Frawley rose to prominence in the 1950s as Fred Mertz on “I Love Lucy.”

“I didn’t have any conversations with anybody who actually knew Bill,” Simmons told Joe McGovern as part of TheWrap’s Screening Series. “At first it was frustrating for me, doing my research, trying to find anything about Bill off camera, trying to find any footage of him outside of ‘I Love Lucy’ or obviously his film roles.”

Unable to find individuals who directly knew Frawley, Simmons decided to base his performance on published information, which he found liberating. 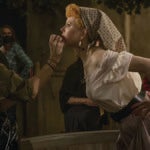 Also Read:
Why ‘Being the Ricardos’ Cinematographer Jeff Cronenweth Modernized ‘I Love Lucy’ in Recreations

“At the end of the day, I found that to be a little bit freeing in a way because all the information I was able to get about Bill was from other people’s perspective, whether it was a Vivian Vance biography (Vance played Ethel Mertz), or Desi’s autobiography or an interview with Jess Oppenheimer, the creator, and showrunner,” Simmons said. “Bill didn’t write a book, ‘this is my life,’ he didn’t have kids, he didn’t leave that kind of legacy.”

Simmons added, “So, interestingly, to me, learning about a character, by character I mean Bill Frawley, and not Fred Mertz, based on what other people thought of him based on other people’s perspectives, I think can be more valid and more interesting, at least from my perspective as an actor than then, Bill saying, ‘Well, this was my life, this is what I felt. And this is how I thought.”

Simmons noted director Aaron Sorkin wasn’t looking for impressions either and advised his actors to look from within.

“I found it ultimately, kind of freeing in a way, and it took a little bit of that onus off that, and Aaron telling all of us not to worry about doing a spot on impression, just try to inhabit these people from the inside out, which is the way I generally prefer to work anyway,” Simmons said.

Watch more of the interview with J.K. Simmons in the embed above and the full interview here.